Researchers at iTHES are developing coherent theories that can describe natural and physical processes that span many scales and disciplines.

Some of the most intractable scientific problems involve natural and physical processes that span many scales and disciplines, from atoms to organs, and from quarks to galaxies. Developing coherent theories that can describe these fundamental phenomena will be crucial to understanding the origins of the Universe and life on Earth. Researchers at iTHES are inventing solutions to link the vast with the tiny. 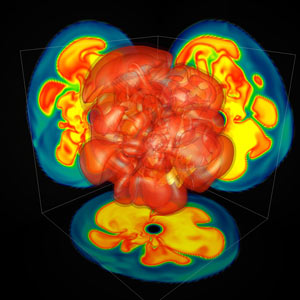 Creating a coherent model of stellar lifecycles is one of the biggest challenges facing science today. The wide range of spatial scales involved makes this very difficult. The interdisciplinary Theoretical Science Research Group (iTHES) was established at RIKEN in 2013 to develop theoretical and computational tools for integrating the many scales and disciplines of science together. Ultimately, researchers at iTHES are helping to answer some of the most fundamental questions about the origins of the Universe and life on Earth.

A single supernova, for example, can burn as bright as all the stars in its host galaxy. It reaches temperatures and pressures high enough to synthesize heavy elements, jettisoning them out into the cosmos where they accumulate over billions of years into stars, planets and life as we know it. The age, geometry and components of the Universe can be measured by the brightness of a specific type of supernova that occurs when a white dwarf star explodes. More massive stars instead submit to gravitational forces and collapse into dense neutron stars, or further into black holes, while their outer layers explode as supernovae. These supernovae eject energized neutrinos, most of which will travel through the Universe forever.

From the furthest emission to the smallest elementary particle is a difference of scale many orders of magnitude wide. Scientists have traditionally studied discrete aspects of these physical processes by limiting their investigation to more manageable ranges. Researchers at iTHES, however, are utilizing powerful supercomputers (Fig. 1) as well as developing theoretical methods to help scientists cross the boundaries between the different scales.

The concept of bringing together many disciplines to create a broader understanding is not a new one. In the early days of the scientific revolution, scholars moved freely across the natural sciences. As the depth of knowledge about the natural world increased, however, distinct disciplines branched off into specialized sub-disciplines.

In the past century, important new theories have brought us closer to the reunification of the sciences. One such idea is the mathematical concept called the renormalization group, which was developed to study macroscopic phenomena emerging from complex microscopic fluctuations. This approach involves breaking down a multiscale problem into a series of more manageable steps, one for each length scale. The strategy was first used in the 1950s to resolve the conflict between quantum field theory, which predicts that electrons have infinite charge, and the finite electron charge measured in experiments. Kenneth Wilson later conducted Nobel-prize-winning work using the renormalization group method to describe the critical point at which a material changes its state between, for example, ferromagnetic and paramagnetic phases. The approach has revealed similarities between many superficially distinct phenomena.

Similar theories are only just beginning to emerge in the biological sciences. Atsushi Mochizuki, who currently heads the Interdisciplinary Theoretical Biology Team at iTHES, introduced a concept called linkage logic to analyze the dynamics of very complex biological networks1. Gene expression, for example, involves the interaction of numerous species of DNA, RNA and proteins. To understand how these linkages work, researchers typically conduct experiments in which they manipulate the activity of one or a few molecules and then examine the effects. But regulatory networks are too large and complex to understand solely through approaches based on trial and error. Mochizuki thus developed a mathematical method for stripping the regulatory network down to its essence. Using linkage logic, he was able to show that only 16 of 76 genes that control embryogenesis in the sea squirt Ciona intestinalis are needed to describe the dynamics of the process.

Figure 2: Researchers at iTHES have developed a technique called replica-exchange molecular dynamics that can expand the temperature range of protein simulations using parallel computing systems. The technique involves simultaneously simulating many copies of a molecular system at different temperatures. From time to time, the temperature between neighboring replicas are exchanged and this exchange is either accepted or rejected based on a statistical algorithm. © 2015 Yuji Sugita, RIKEN Theoretical Molecular Science Laboratory

Every team at iTHES is developing, expanding and applying concepts like linkage logic that transcend different scales and help to explain complex phenomena.

The iTHES Interdisciplinary Condensed Matter Physics Team led by Franco Nori, for example, is studying quantum information processing devices that could be used to solve difficult problems in various areas of physics2. Simulating the spin states of just 40 particles would require more computer memory than was used to store all of the information produced by humanity in 2007. Mathematical and statistical techniques like the renormalization group and linkage logic could help to curtail the exponential explosion of operations required to simulate such quantum systems, but only to a marginal degree. Quantum simulators and quantum computers, on the other hand, would be able to store these large amounts of information in a relatively small amount of physical space. Nori’s team is studying various aspects of quantum nanoelectronics and information processing for next-generation computing systems.

Yuji Sugita, whose laboratory is a member of the Interdisciplinary Mathematical and Computational Collaboration Team at iTHES, is developing a method called replica-exchange molecular dynamics that can expand the temperature range of a target molecule’s accessible conformational space in simulations. The technique is especially suitable for use on parallel computing systems such as the K computer and has been used to study protein folding and stability. For this application, the technique allows identical copies of a molecular system such as a peptide protein in solution to be simulated simultaneously, at different temperatures. At specific time intervals, temperatures between two neighboring copies are exchanged based on the statistical algorithm known as the Metropolis criterion (Fig. 2). Adaptations of the original method have also been developed to exchange other parameters like pressure and surface tension. Sugita and a team of RIKEN researchers recently incorporated the method into a new molecular dynamics software called GENESIS3, which was used to simulate the cytoplasm of the bacterium Mycoplasma genitalium at a resolution of more than 100,000,000 atoms.

Masato Taki, a particle physicist at the Interdisciplinary Fundamental Physics Team, iTHES, has collaborated with an engineer at Tokyo Institute of Technology to develop a mathematical theory for an invisibility cloak4. Existing devices that can make objects disappear from sight have a serious and critical problem—they can conceal the wearer from external onlookers, but also blind them to external onlookers. Magical cloaks like those worn by Harry Potter, however, allow for asymmetric visibility. To achieve this, Taki and his collaborators propose bending photons using an optical resonator lattice—a system that they have managed to successfully simulate. They are currently focused on engineering a metamaterial that can achieve this in real life.

From quarks to fish

Collaboration is crucial to the success of iTHES. And one of the best ways to encourage multidisciplinary collaboration is to create an environment that facilitates genuine and consistent engagement, especially among younger scientists.

Senior iTHES researchers are encouraged to step outside their comfort zones as an example to their younger colleagues. The group hosts a weekly Friday coffee meeting and organizes regular seminars, where academic and industry leaders are invited to speak about drug design, artificial intelligence, autonomous cars and Google’s translating technology. iTHES hosts joint symposiums and workshops with institutes that share common research interests like the Simons Centre for the Study of Living Machines in India and the Core for Theoretical Science Research at Osaka University. The group is also in the process of formalizing agreements for cross-appointments with institutes abroad.

Returns on these investments in the form of cross-pollination of ideas are already being felt. Takashi Okada, a young postdoc with a background in particle physics, recently joined Mochizuki’s theoretical biology laboratory to develop a mathematical theorem for identifying the response patterns of chemical reaction networks to perturbations of reaction enzymes. And particle theorist Noriaki Ogawa at the RIKEN Quantum Hadron Physics Laboratory splits his time between biology and physics. He is currently working with a diverse team to describe the regular arrangement and pattern formation of cells in fish retina that allows them to see red, blue, green and ultraviolet light. And finally, postdoctoral researcher Yuji Sakai, who used to spend his time theorizing about quarks and gluons is now fully committed to theoretical biology in Mochizuki’s laboratory. He is trying to uncover the mystery of how a tightly coiled string of DNA, two meters long, peels apart to form identical copies without getting entangled. Sakai hopes to model this fundamental, yet routine, biological process of replication.

The Universe holds vast secrets that can only be answered by free and curious minds. iTHES hopes to help researchers transcend scientific boundaries to answer the big questions about the cosmos and human existence.