Frustration explains differences in superconductivity in molecular conductors and cuprates 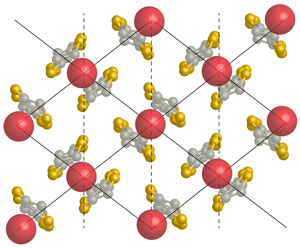 “The superconductivity mechanisms in cuprates and molecular conductors are under debate,” notes chief scientist Seiji Yunoki. “The two systems have a lot of similarities, but also some differences.”

In particular, they investigated how adding electrons to it affects its electronic properties. The trio also explored what happens when electrons are removed, which is equivalent to adding ‘holes’—gaps in the molecular structure that lack electrons. They discovered that there are two different types of superconductivity that have different symmetries—one is favored when electrons are added, while the other is favored when holes are added.

This theoretical prediction has recently been broadly confirmed by an experimental study conducted by a team of experimentalists at RIKEN.

This differs from what happens in cuprates. The researchers attribute this difference to the fact that the crystal structure of the molecular conductor is such that various states are energetically competing. As a result, they switch between each other when there are subtle changes in parameters. This phenomenon is known as geometrical frustration.

“Our simulation indicates that the superconductivity mechanism in our system is different in the strictest sense because it has geometrical frustration, whereas there is no frustration in cuprates,” says Watanabe.

The team now intends to investigate what happens to their molecular conductor at higher temperatures.