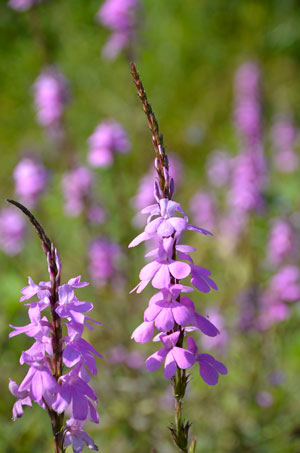 The genome of the parasitic plant Striga, commonly known as witchweed, has been sequenced for the first time by RIKEN plant geneticists1. This genetic analysis both offers insights into how parasitic plants evolved and a tool for improving the monitoring and control of the costly weed.

A major agricultural pest, Striga (Fig. 1) causes billions of dollars of crop losses annually. It taps into the roots of host plants, depriving them of water and nutrients. Herbicides and mechanical removal can control the weed, but these methods are costly and do not remove seeds in the soil.

To improve our understanding of Striga ’s evolution and biology, Ken Shirasu’s team at the RIKEN Center for Sustainable Resource Science has sequenced the genome of a Striga species that invaded the US in the 1950s. They also sequenced the transcriptome of the most devastating Striga species.

The team identified roughly 35,000 protein-coding genes in the genome, and their analysis revealed evidence of two whole-genome duplication events in its evolution. More significantly, they found evidence that the Striga genome evolved in three phases, as suggested by theories of parasitic plant evolution.

First, Striga acquired genes to form its infectious root by repurposing genes normally involved in the regulation of lateral roots.

The parasite next lost certain functions in favor of getting a resource from the host. For example, gene families related to photosynthesis shrunk in Striga because it relies on carbon from its host. Striga also lost many genes responsible for hormonal response to environmental stimuli such as water loss. 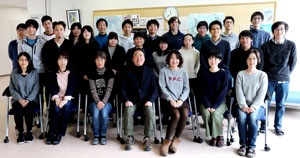 Ken Shirasu (center of first row) and his team have sequenced the genome of the parasitic plant Striga, providing insight into its evolution. © 2019 RIKEN

Thirdly, the relationship becomes more specialized on specific hosts. Striga seeds and seedlings sense their host by detecting hormones known as strigolactones. The strigolactone-sensing gene family was dramatically expanded in Striga, enabling the seedlings to recognize and colonize on a wide range of hosts.

“The expansion of the strigolactone-sensing gene family was surprising,” says Shirasu. “We also found that many of these genes are expressed not in seeds but in roots, meaning that some of the gene family members are doing something other than controlling germination.”

Finally, comparison of the Striga genome with other plant genomes revealed several transfers of large genomic fragments between species. This suggests that Striga can acquire genetic material from its hosts, which may have affected its evolution.

These findings open the door to further genetic and genomic analyses. “With this genomic data, we can also currently monitor Striga spreading in field at the genome level,” says Shirasu. “This means that we can learn how Striga is adapting to infect current cultivars or to avoid agrochemicals, which could provide a strategy to select cultivars and chemicals.”