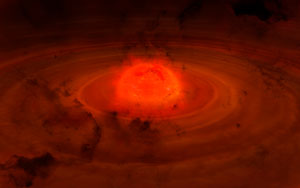 Figure 1: An artist’s impression of a protostar—a star in the process of formation. RIKEN astronomers have discovered that a huge protostar is getting bigger despite propelling plumes of hot gas away from itself. © MARK GARLICK/SCIENCE PHOTO LIBRARY

A gigantic embryonic star is still getting bigger, even though it propels vast plumes of hot gas away from itself, RIKEN astronomers have found1. The discovery could help to solve an enduring mystery about how massive stars grow so large.

Young protostars put on weight by gathering matter from a dense disk of gas and dust that swirls around them (Fig. 1). But once protostars grow beyond a certain size, further accretion is hampered by the light they emit. This may happen when ultraviolet light strips electrons from atoms in the surrounding disk to produce a hot ionized plasma that evaporates from the star, a process called photoevaporative outflow.

Theoretical calculations have suggested that this and related factors are too weak to stop accretion. But there is insufficient observational evidence to back this up, not least because the most massive protostars are rare and very distant from the Earth.

Yichen Zhang of the RIKEN Star and Planet Formation Laboratory and colleagues have now studied a protostar known as G45.47+0.05 using the ALMA radio observatory in Chile and the VLA radio observatory in New Mexico. They looked for radio waves and microwaves emitted when an electron falls between two energy levels in a hydrogen atom and when electrons scatter positive ions without being captured—two telltale signs that a gas is being ionized.

The researchers identified these signals inside an hourglass-shaped region extending outwards from the protostar. Their observations showed that the gas reaches temperatures of about 10,000 degrees Celsius and moves at about 30 kilometers per second. This suggests that the hourglass-shaped region is filled with ionized gas that has been launched away from the protostar’s disk by light-driven ionization.

“This is the first robust detection of a resolved photoevaporative outflow driven by a very massive star in formation,” says Zhang. “The outflow structure is clearly resolved, which allows us to scrutinize the material distribution and dynamics in such outflows.”

The protostar is already 30 to 50 times more massive than our Sun, but the team found a narrower jet structure within the hourglass that indicates it is still growing. “This high-velocity jet is believed to be driven magnetically by the accretion disk, and is thus evidence that accretion is ongoing,” says Zhang.

The researchers will study G45 in more detail to understand how the ionized outflow interacts with its surroundings. They will also look for other examples of protostars with similar outflows.