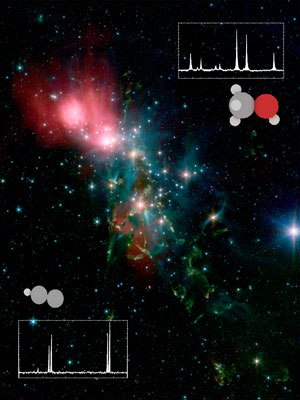 Figure 1: An infrared image of a stellar nursery in the constellation Perseus. The insets show molecules and spectra for methanol (top) and C2H (bottom). Courtesy of NASA/JPL-Caltech

By surveying dozens of embryonic stars in a molecular cloud, RIKEN astronomers have uncovered a surprising diversity in the organic chemicals they contain1. This finding could help determine whether the chemistry of our Solar System is typical of other planetary systems or not.

The Earth is rich in organic molecules, which make up the basis of all of its life forms. Astrochemists are keen to discover whether this high abundance of organic molecules is unique to our Solar System or whether there are other planetary systems with similar chemical makeups.

“We don’t know if our Solar System is normal or not,” explains Aya Higuchi of the RIKEN Cluster for Pioneering Research. “So far, no Earth-like planets have been discovered in other systems. So we’re wondering why.”

Molecular clouds are interstellar regions made up of gas and dust. They have been dubbed stellar nurseries because many of them cradle protostars, essentially solar systems in the making, whose stars have not yet become dense enough to begin nuclear reactions.

Now, Nami Sakai, Higuchi and co-workers have used radio telescopes in Japan and Spain to analyze organic molecules in 36 protostars in a nearby molecular cloud in the Perseus constellation (Fig. 1).

“We focused on the chemical diversity within a single molecular cloud,” says Sakai. “That’s the originality of this study.”

“We were very surprised,” comments Sakai. “Two orders of magnitude is a huge difference.”

They also found evidence that this ratio depends on where the protostars lie within the molecular cloud. Protostars closer to the edge tended to have a higher proportion of carbon chains. This finding fits nicely with a theory that the team had proposed about the chemical evolution of molecular clusters.

The team intends to take the study further by performing a survey using the Atacama Large Millimeter/submillimeter Array (ALMA) in Chile. This will enhance the resolution of the measurements, allowing them to investigate how the chemical makeup varies within protostar systems. The scientists also hope to investigate other measures of chemical diversity besides the ratio used in the present study.