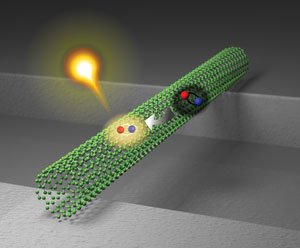 Figure 1: Schematic drawing showing a dark exciton converting into a bright exciton before emitting light. Three RIKEN physicists have shown that the conversion rate of this process is higher in longer nanotubes. Reproduced from Ref. 1 and licensed under CC BY 4.0 © 2019 A. Ishii et al.

Tailoring the dimensions and other attributes of carbon nanotubes can substantially boost the amount of light they emit, three physicists at RIKEN have discovered1. This finding promises to lead to the development of highly efficient photonic devices.

Carbon nanotubes are tiny cylinders that are just a nanometer to a few nanometers in diameter but can be up to several micrometers in length. Their excellent electronic and mechanical properties make them attractive for use in energy-efficient devices. In particular, a defect in the otherwise pure atomic carbon structures of nanotubes can emit single photons of light—a vital component for many nanoscale devices that are needed for quantum computation and communications.

In a typical light-emitting device, laser light or an electric field creates pairs of electrons and holes known as excitons. Sometime later, the electron and hole recombine and the exciton annihilates. Depending on the symmetry of the exciton, annihilation can result in the emission of light or not. 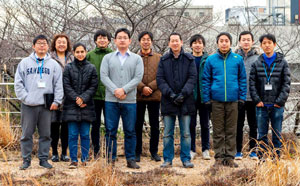 Yuichiro Kato (fifth from the right) and two others in his group have discovered how to improve light emission from nanotubes through the contribution of dark excitons. © 2020 RIKEN

Now, Yuichiro Kato and two colleagues, all at the RIKEN Nanoscale Quantum Photonics Laboratory, have discovered that by tailoring the specifications of the nanotubes more than half of the dark excitons can be converted into bright ones, thereby greatly enhancing the light output of the nanotubes (Fig. 1).

The researchers performed time-resolved luminescence measurements on a range of carbon nanotubes. By fitting the time-resolved luminescence traces with a model, they found that the conversion rate between dark and bright excitons depends on the length, diameter and chirality of the nanotubes. The three researchers estimated that in longer nanotubes, the conversion rate of dark to bright excitons was so high that more than half of the dark excitons contributed to the total luminescence.

“These findings show that dark excitons can significantly affect the emission kinetics in low-dimensional materials such as nanotubes,” says Kato. “They thus point to the potential of using surface interactions to engineer the dark-to-bright conversion process.”

The team now intends to explore the potential of harnessing this effect. “We are interested in using this efficient conversion process to achieve carbon-nanotube single-photon emitters that have better performance,” says Kato.