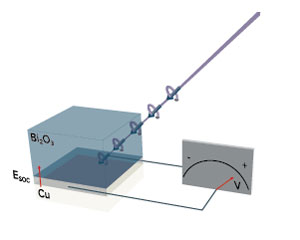 A combination of two materials that can detect rotating light has been demonstrated by physicists at RIKEN1. This approach could help develop information processing devices that have ultralow power consumption.

In addition to their mass and electrical charge, electrons have a property called spin. Spin can be thought of as the electron’s rotation on its own axis, and it takes one of two values: clockwise or counter clockwise, which are often more simply referred to as just ‘up’ and ‘down’. And just like a flow of electrons generates an electrical current, a flow of electrons of the same spin creates a spin current, which has been heralded as the future of low-power electronic devices.

One way to create a spin current is to use light. Circularly polarized light, because it also rotates about its axis of propagation (Fig. 1), can create spin-polarized electrons when it is absorbed by an appropriate material. But this list of materials is small and limited to those that are intrinsically magnetic.

Now, Jorge Puebla and Florent Auvray from the Quantum Nano-scale Magnetism Research Team (led by Yoshichika Otani) at the RIKEN Center for Emergent Matter Science and their co-workers have created a non-magnetic material in which they could optically induce a spin current and then convert it to a measurable electrical current.

They took advantage of a phenomenon called the Rashba effect. This effect couples the spin of the electrons to their spatial motion, which can convert spin current to electrical charge current.

“The effect of this ‘Rashba field’ is that up and down spin-polarized electrons move in opposite directions perpendicular to the direction that the electrons are flowing,” explains Puebla. “In this way, an electrical current can be converted into a spin current and vice versa.”

Again, the family of materials that intrinsically exhibit the Rashba effect is small because it requires a very specific asymmetric arrangement of atoms. So instead, Puebla’s team showed that a very large Rashba effect can be produced at the interface between copper and bismuth oxide.

To experimentally demonstrate this idea, the team shone a spiraling beam of laser light on the interface. They were able to measure a large light-induced voltage across the materials. “We demonstrated the absorption of light with spin information,” says Puebla.

This effect cannot be seen in either of the two materials separately. “Our work motivates us to explore whether other interfaces have properties that differ drastically from those of the materials that make up the interface,” says Puebla.