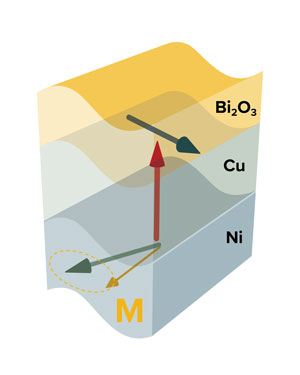 Figure 1: Surface waves in the substrate (not shown) cause the magnetization (orange arrow) in the bottom nickel layer to precess, which generates a spin current (red arrow) in the second copper layer. This is converted into an electric current (dark grey arrow) in the top bismuth oxide layer. Reprinted with permission from Ref. 1. Copyright (2018) by the American Physical Society. 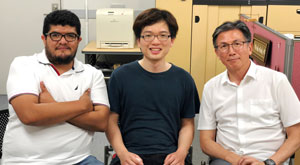 (From left to right) Jorge Puebla, Mingran Xu and Yoshichika Otani of the Quantum Nano-Scale Magnetism Research Team at RIKEN have created a hybrid nanodevice that creates a spin current from acoustic spin waves using the inverse Edelstein effect and then converts it into an electric current. © 2018 RIKEN