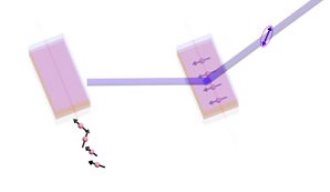 Figure 1: In the Rashba−Edelstein effect, the electric field between two materials orients electrons’ spins (indicated by black arrows) in the same direction. Light reflected from the sample is then polarized by the accumulated spins (right). © 2017 RIKEN Center for Emergent Matter Science