Simulations suggest that two stars came together to form a blue supergiant, which subsequently exploded 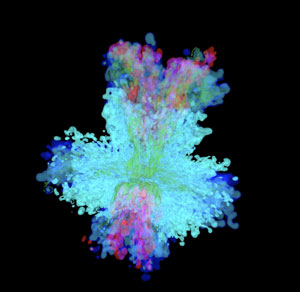 Figure 1: This computer simulation of a supernova shows how matter is ejected from the heart of an exploding star (explore the 3D model in the Sketchfab website) © 2020 RIKEN Astrophysical Big Bang Laboratory

A supernova in a nearby galaxy may have originated from an explosion of a blue supergiant formed by the merger of two stars, simulations by RIKEN astrophysicists suggest1. The asymmetric nature of this explosion may provide hints for where to look for the elusive neutron star birthed in this stellar cataclysm.

A core-collapse supernova occurs when the core of a massive star can no longer withstand its own gravity. The core collapses in on itself, triggering a violent explosion that blasts away the star’s outer layers, leaving behind a neutron star or black hole.

In 1987, astronomers saw a star explode in the Large Magellanic Cloud, one of our galaxy’s closest neighbors. Since then, scientists have intensively studied the aftermath of this supernova, known as SN 1987A, to understand the nature of the progenitor star and its fate. 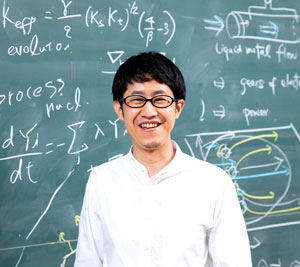 Masaomi Ono and co-workers have simulated a supernova explosion that resulted from a merger between two other stars. © 2020 RIKEN

Meanwhile, x-ray and gamma-ray observations of SN 1987A have revealed clumps of radioactive nickel in the ejected matter. This nickel was formed in the star’s core during its collapse, and is now hurtling away from the star at speeds of more than 4,000 kilometers per second. Previous simulations of the supernova had been unable to fully explain how this nickel could escape so rapidly.

Ono and co-workers simulated asymmetric core-collapse supernova explosions of four progenitor stars and compared them with observations of SN 1987A. The closest match involved a blue supergiant progenitor formed by a merger between two stars: a red supergiant and a main-sequence star. During the merger, the larger star would have stripped matter from its smaller companion, which spiralled inwards until it was completely absorbed, forming a rapidly rotating blue supergiant.

This is the first time that a binary-merger scenario has been tested for the nickel clumping of this supernova, Ono says. The simulation accurately reproduced the speeding clumps of nickel along with two jets of ejecta.

The simulation may also help to find the neutron star that formed during the supernova, which has not been located despite 30 years of searching. In an aspherical explosion, the neutron star could have been kicked in the opposite direction to the bulk of the ejecta, and Ono’s team suggests that astronomers should look for it in the northern part of the inner region of ejected material.