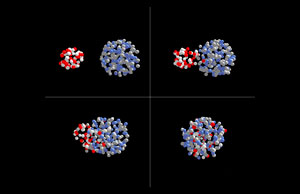 Figure 1: Simulation showing a smaller nucleus (nickel in this case) fusing with a larger one (gold). Nuclear physicists at RIKEN have proposed a new way to estimate the optimum incident energy for synthesizing new superheavy elements that will open up the eighth period of the periodic table. © JENS KONOPKA & HENNING WEBER/SCIENCE PHOTO LIBRARY

Measurements of collisions between small and large atomic nuclei by RIKEN physicists will inform the quest to produce new elements and could lead to new chemistry involving superheavy elements1.

Two tantalizing goals lie nearly within the grasp of experimental nuclear physicists. One is to break into the eighth row of the periodic table. So far, scientists have made all the elements in the first seven rows—from hydrogen (one proton) to oganesson (118 protons). Thus, synthesizing heavier elements will open up new ground.

The other goal is to locate the ‘island of stability’ in the sea of superheavy nuclei. Superheavy elements generally become more unstable the more protons they contain. For example, the most stable isotope of nihonium (113 protons) has a half-life of nearly 8 seconds, whereas that of oganesson is a mere 0.7 milliseconds. But theorists think that this trend will change for nuclei lying just beyond oganesson. They conjecture that a particularly stable nucleus exists that is ‘doubly magic’, having magic numbers of both protons and neutrons. Long-lived superheavy elements will open up a new type of chemistry, which involves more protracted reactions.

To realize these goals, experimentalists need to determine how to maximize their chances of producing superheavy nuclei since it is estimated to take more than three months to synthesize a single atom. To do this, they need to know the repulsive force two nuclei experience when they approach each other due to the attractive force of the nuclear potential.

Now, Taiki Tanaka of the RIKEN Nishina Center for Accelerator-Based Science and co-workers have measured this repulsion by firing small nuclei (neon, magnesium and calcium) at large ones (curium and uranium) and measuring how they scattered.

They discovered that the repulsive barrier is mostly affected by the deformation of the larger nucleus, which is shaped like a rugby ball. Comparison with the excitation functions for producing known superheavy elements suggests that firing the smaller nucleus such that it approaches the side of the deformed larger nucleus will be the most effective strategy for producing new superheavy nuclei.

If this trend holds for heavier nuclei then the optimum energy of the smaller nucleus can be determined just by measuring the repulsive barrier of the larger nucleus, which only takes about a day. “From this systematic study, we’ve proposed a new method to estimate the optimum incident energy to synthesize a new element,” says Tanaka.

The team plans to use this knowledge to make new superheavy elements. “In the short term, we will try to make new elements such as elements 119 or 120,” explains Tanaka. “In a decade or two, we want to reach the island of stability, but we’re not sure where it is.”