High-frequency noise is the biggest limitation for quantum computers 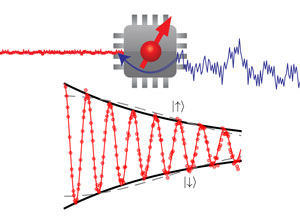 Top: Physicists at RIKEN have investigated the effect of canceling low-frequency noise (present in the blue line on the right, but removed from the red line on the left) on the coherence and fidelity of qubits in gallium arsenide quantum dots, which are encoded as electron spin (red arrow). Bottom: The system undergoes coherent oscillations between the spin up and spin down states.Reproduced from Ref. 1 and licensed under CC BY 4.0 © 2020 T. Nakajima et al.

The most problematic noise source for the accurate manipulation of data in quantum computers based on semiconductor quantum dots has been identified by a RIKEN-led team1. This finding could help improve the accuracy of quantum computers.

Quantum computers have the potential to solve problems that are intractable for conventional computers. Of the various technologies being investigated for realizing quantum computers, manipulating the spins of individual electrons trapped in tiny semiconductor blobs known as quantum dots is one of the most promising, particularly as it can use existing semiconductor fabrication technology.

Quantum computers operate by storing and manipulating qubits—the quantum equivalent of bits in conventional computers. In computers based on semiconductor quantum dots, a qubit is the spin of an electron trapped in a quantum dot.

Since electron spin is highly sensitive to its environment, it is critical to preserve its state for as long as possible—a parameter known as its coherence. It is also important to ensure that operations on the qubit are implemented accurately—a parameter called the fidelity. Engineers want to optimize both the coherence and fidelity of quantum computers.

“It’s generally believed that if you have a good coherence then you can expect a high fidelity,” says Takashi Nakajima of the RIKEN Center for Emergent Matter Science. “But the relationship between the two parameters wasn’t clear for spin qubits.” 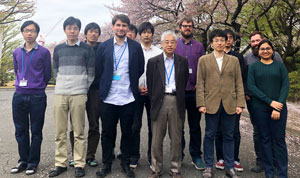 Seigo Tarucha (sixth from right), Takashi Nakajima (second from left) and their co-workers have found that the fidelity of a single-electron spin qubit in gallium arsenide is not limited by low-frequency nuclear-spin noise but by high-frequency noise caused by charge fluctuations.© 2020 RIKEN

Now, a team led by Seigo Tarucha has examined the effect of canceling the low-frequency component of the environmental noise, which can arise from control electronics, heat, impurities and nuclear spins, on the coherence and fidelity of spin qubits.

They employed a similar technique to that used in noise-canceling headphones. “Noise-canceling headphones measure the environmental noise and generate a feedback signal to cancel it,” explains Nakajima. “We did a similar thing for qubits—we detected the noise in the semiconductor device and then applied a microwave signal to cancel this noise.” In this way, the team eliminated nearly all of the low-frequency noise (Fig. 1).

The researchers found that the high-frequency noise originates from charge fluctuations in their device. “It came as a surprise because most of the noise was thought to come from nuclear-spin noise in the system,” says Nakajima. To improve the fidelity, and hence the reliability of calculations, engineers will need to find ways to reduce this high-frequency noise, he adds.