Pseudo-2D architecture for quantum computers is simple and scalable 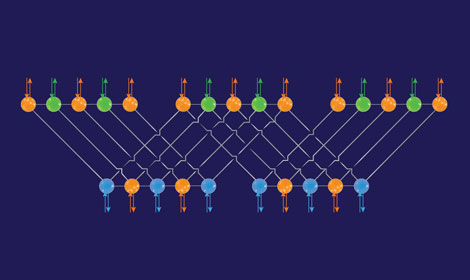 Figure 1: By deforming a square array of qubits (colored dots) into two rows, a team of RIKEN scientists has devised a simple and scalable architecture for quantum computers. Since all the qubits are located on edges, they are readily accessible. The humps where two wires cross are airbridges. © 2020 Tokyo University of Science

A simple pseudo-2D architecture for connecting qubits—the building blocks of quantum computers—has been devised by RIKEN physicists1. This promises to make it easier to construct larger quantum computers.

Quantum computers are anticipated to solve certain problems overwhelmingly faster than conventional computers, but despite rapid progress in recent years, the technology is still in its infancy. “We’re still in the late 1940s or early 1950s, if we compare the development of quantum computers with that of conventional computers,” notes Jaw-Shen Tsai of the RIKEN Center for Emergent Matter Science and the Tokyo University of Science.

One bottleneck to developing larger quantum computers is the problem of how to arrange qubits in such a way that they can both interact with their neighbors and be readily accessed by external circuits and devices. Conventional 2D networks suffer from the problem that, as the number of qubits increases, qubits buried deep inside the networks become difficult to access.

To overcome this problem, large companies such as Google and IBM have been exploring complex 3D architectures. “It’s kind of a brute-force approach,” says Tsai. “It’s hard to do and it’s not clear how scalable it is,” he adds.

Tsai and his team have been exploring a different tack from the big companies. “It’s very hard for research institutes like RIKEN to compete with these guys if we play the same game,” Tsai says. “So we tried to do something different and solve the problem they aren’t solving.” 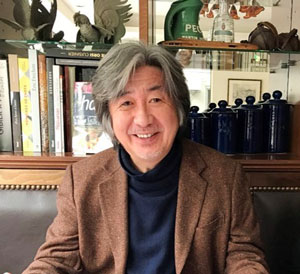 Now, after about three years of work, Tsai and his co-workers have come up with a quasi-2D architecture that has many advantages over 3D ones.

Their architecture is basically a square array of qubits deformed in such a way that all the qubits are arranged in two rows (Fig. 1)—a bilinear array with cross wiring, as Tsai calls it. Since all the qubits lie on the edges, it is easy to access them.

The deformation means that some wires cross each other, but the team overcame this problem by using airbridges so that one wire passes over the other one, much like a bridge at the intersection of two roads allows traffic to flow without interruption. Tests showed that there was minimal crosstalk between wires.

The scheme is much easier to construct than 3D ones since it is simpler and can be made using conventional semiconductor fabrication methods. It also reduces the number of wires that cross each other. And importantly, it is easy to scale up.

The team now plans to use the architecture to make a 10×10 array of qubits.