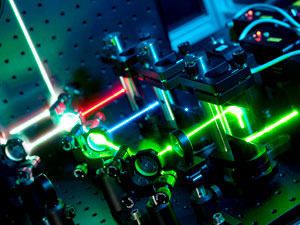 A way to reliably produce x-ray pulses that are both incredibly short and have high energies has been demonstrated by physicists at RIKEN1. This will allow researchers to investigate ultrashort phenomena that involve multiple particles of light, or photons.

It is hard to appreciate how short an attosecond is. Each second is made up of a quintillion (1018) attoseconds; the equivalent number of seconds would be more than twice the current age of the Universe. Light can travel from the Earth to the Moon in about 1.25 seconds, but it covers a mere 0.3 nanometers in an attosecond.

When scientists produced laser pulses on the timescale of several hundred attoseconds in 2001, they opened up new vistas to researchers. In particular, it became possible to probe and control the motion of electrons in molecules.

Pulse durations have dropped to a few tens of attoseconds today, but one limitation is that the pulses have low energies. Producing more-energetic attosecond pulses will allow researchers to explore nonlinear phenomena that involve two or more photons.

Now, Eiji Takahashi of the RIKEN Center for Advanced Photonics and his co-workers have produced high-energy pulses in the attosecond regime.

“To the best of our knowledge, the combination of the 240-nanojoule energy and 170-attosecond duration of our isolated attosecond pulses represents a new record for studies using synthesizers or other techniques. Moreover, despite being an attosecond pulse, its peak power exceeds a gigawatt,” says Takahashi.

The team produced these pulses by combining, or synthesizing, three pulses with wavelengths ranging from red light to infrared light. Importantly, they were able to achieve precise control over the timing and shape of these pulses, allowing the team to both optimize and accurately reproduce them. The researchers then used the combined pulse to produce an attosecond pulse using a nonlinear process known as high-order harmonic generation in argon gas.

To realize the stability they needed, the team developed a stabilized, high-energy amplifier for driving their synthesizer. This high-energy laser amplifier stretches a pulse in duration, amplifies it, and then compresses it with actively stabilizing carrier-envelope phases. “The development of this amplifier was one of the key achievements in this study,” says Takahashi.

The team anticipates that their method will accelerate research in the attosecond regime. In particular, it will be useful for probing electrons using attosecond spectroscopy. “We’re convinced our method will pave the way to realize nonlinear attosecond-science experiments in the near future,” says Takahashi. “This will certainly catalyze research on ultrafast phenomena and nonlinear optics.”