Light nucleus predicted to be stable despite having two strange quarks 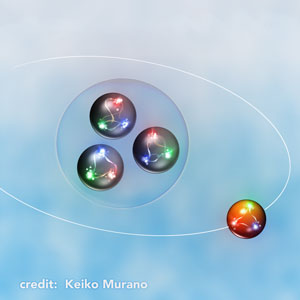 Figure 1: An artist’s impression of a bound nucleus containing three normal nucleons, which have up and down quarks, and a Xi hyperon (gold sphere at bottom right), which contains two strange quarks. Calculations by RIKEN nuclear physicists predict that this exotic nucleus will be stable. © 2020 Keiko Murano

Adding an exotic particle known as a Xi hyperon to a helium nucleus with three nucleons could produce a nucleus that is temporarily stable, calculations by RIKEN nuclear physicists have predicted1. This result will help experimentalists search for the nucleus and provide insights into both nuclear physics and the structure of neutron stars.

Nuclear physicists have long been interested in hypernuclei—nuclei that contain one or more hyperons in which at least one of the three quarks is a strange quark. While only a handful of hypernuclei have been created at nuclear physics facilities, they provide a valuable new window into the mysteries of nuclei.

“Standard nuclei are defined by how many protons and neutrons they contain, and that’s it. They’re essentially two dimensional,” says Takumi Doi at the RIKEN Nishina Center for Accelerator-Based Science and the RIKEN Interdisciplinary Theoretical and Mathematical Sciences Program. “Hyperons offer us an extra dimension through the number of strange quarks—this enables us to gain deeper insight into a nucleus, such as the interactions that make a nucleus stable.”

Most studies have focused on hyperons that contain just one strange quark. But hyperons with two strange quarks, known as Xi hyperons, are also possible. So far, one hypernucleus containing a Xi hyperon and 14 nucleons has been made.

Doi and co-workers suspected that lighter hypernuclei containing Xi hyperon may exist, and they performed calculations of the interaction between a Xi hyperon and a nucleon on RIKEN’s K supercomputer to find out. Their results predict that a hypernucleus made up of three normal nucleons and one Xi hyperon should be stable enough to be made in experiments. According to their calculations, this is the lightest hypernucleus containing a Xi hyperon.

Their results came as a surprise because they differed greatly from those obtained using an approximation. “We predicted that the interaction is attractive when the Xi hyperon and a nucleon are in a particular state, whereas an approximate approach estimates that the corresponding potential will be repulsive,” says Doi. “So these results are very different.”

The results will not only give experimentalists a target to aim for, they will also inform studies into neutron stars. Neutron stars are the extremely dense remnants of large stars that have collapsed under their own gravity and undergone supernova explosions. Their interiors may provide the conditions under which hypernuclei containing Xi hyperons could exist.