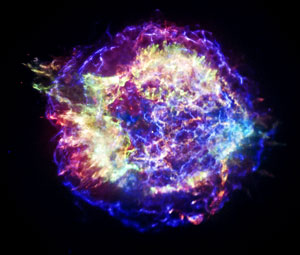 Figure 1: The Cassiopeia A supernova remnant as observed by NASA’s Chandra X-ray Observatory. Calculations by RIKEN based on Chandra data indicate that the progenitor star had a companion, which has yet to be observed. © NASA/ CXC/ SAO

The massive star that exploded to form the supernova known as Cassiopeia A most likely had a companion star that has yet to be spotted, a spectroscopic analysis by RIKEN astrophysicists suggests1. This will provide fresh impetus to efforts to locate the companion.

Supernovae are among the most violent events in the Universe. They occur when a massive star exhausts its supply of fuel and its core collapses under the huge gravitational pull of the star.

While theories have been put forward to explain the processes involved, they have yet to be corroborated by observations. “The explosion mechanisms of massive stars are a long-standing problem in astrophysics,” notes Toshiki Sato of the RIKEN High Energy Astrophysics Laboratory. “We have theoretical scenarios, but we would like to confirm them by observations.”

An important parameter in studying the evolution of stars is the ratio of heavier elements to the lightest element, hydrogen—a ratio known as the metallicity. Shortly after the Big Bang, there were only three elements: hydrogen, helium and lithium. But with each succeeding generation of stars, heavier elements have become increasingly abundant.

Now, Sato and his co-workers have determined the initial metallicity of Cassiopeia A (Fig. 1) for the first time. They did this by combining data from the 13 observations of the supernova by the Chandra X-ray Observatory over the past 18 years to find the ratio of the elements manganese to chromium at the time of the explosion. From this ratio, they estimated that the initial metallicity of Cassiopeia A was lower than that of the Sun.

Cassiopeia A is known as a stripped envelope supernova because its outer layer of hydrogen has been stripped away. But the low initial metallicity implies that the stellar wind would have been too weak to strip the hydrogen layer away. The only explanation that remains is that it was removed by a companion star—a surprising finding since no indication of a companion star has been found to date.

“The reason it hasn’t been observed may be because it is a compact, faint object such as a black hole, a neutron star or a white dwarf,” says Sato. “This finding thus provides a new direction for understanding the origin of Cassiopeia A. We hope it will lead to a significant advance in understanding the mechanism of supernova explosions.”