Clumpy structure in remnant probably formed in supernova explosion itself 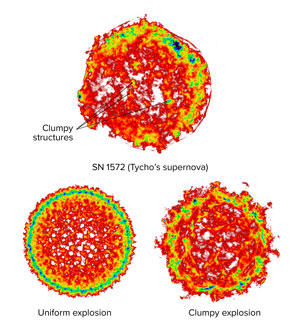 Danish nobleman Tycho Brahe was taking an evening stroll on 11 November 1572 when he spotted a new star that outshone all other stars. The star gradually faded, becoming too faint to see with the naked eye after about a year and a half. It had to wait until the 1960s for telescopes to become powerful enough to detect it again.

The ‘new star’ turned out to be a supernova explosion of an old star that had reached the end of its life. And what astronomers observe today are the remnants of that explosion.

X-ray images of the remnant reveal that it has a distinctly clumpy appearance, and much speculation exists about the origin of this clumpiness. There are two main theories: one posits that the clumps were present in the explosion itself, whereas the other hypothesizes that they arose during the subsequent dispersion of gas.

Now, by performing a statistical analysis of x-ray images of the remnant, Toshiki Sato at the RIKEN High Energy Astrophysics Laboratory and his co-workers have found compelling evidence that the clumpiness arose from the explosion.

In their analysis, the researchers used a statistic known as the genus statistic, which expresses the topology of a geometric object. “The genus statistic allows us to count the number of isolated ‘holes’ and ‘clumps’ in a field,” explains Sato.