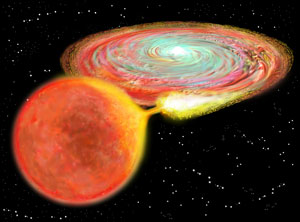 Figure 1: A type Ia supernova occurs in a binary-star system when gas falls onto an old, dense star (white dwarf, upper right) from its companion star (left). The extra mass triggers a wave of nuclear fusion of relatively heavy elements, such as carbon, causing the white dwarf to explode. © RUSSELL KIGHTLEY/SCIENCE PHOTO LIBRARY

A RIKEN researcher has helped to create a simulation of supernovae that could enable astronomers to identify the stars involved in a type Ia supernova—one of the biggest explosions in the Universe1.

Researchers have long debated what kind of companion star causes these explosions. They do not know whether the companion star is a red giant, an ordinary star like our own Sun, or even another white dwarf.

To help resolve the question, Ataru Tanikawa of the RIKEN Center for Computational Science and two colleagues developed a computer simulation of a type Ia supernova caused by a pair of white dwarfs. The primary white dwarf had the same mass as our Sun and contained carbon and oxygen surrounded by a thin shell of helium, while its companion was 0.6 times as massive and lacked a helium shell.

As the heavier white dwarf stripped matter from the companion, it acquired a hot spot in its helium shell. This triggered fusion reactions that spread around the entire shell in just over 1 second, sending a shock wave into the carbon–oxygen core that caused a thermonuclear detonation a few seconds later. The companion actually survived this explosion and was flung outwards at about 1,700 kilometers per second.

The simulation found that the primary white dwarf disgorged a unique cocktail of elements, including huge amounts of radioactive nickel-56, in agreement with previous observations of type Ia supernovae. “The structure of chemical elements agrees well with observations,” notes Tanikawa. The companion captured some of these elements, but the explosion also stripped away material from the companion and sent it hurtling into space.

Astronomers could look for evidence of these events by studying the elements ejected by a supernova, including the stream of matter ripped from the surviving companion.

The spectrum of light from elements such as oxygen could also reveal how fast they are traveling. To discover if these signatures are indeed created during the spectacular finale of a white dwarf pair, “observers must now search for type Ia supernovae coming toward us or receding from us,” Tanikawa says.