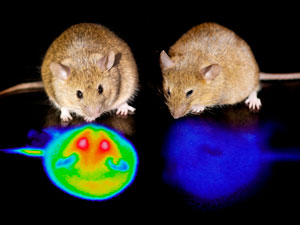 Figure 1: Heat maps of two mice. The mouse on the left is in a normal state, whereas the one on the right is in the hibernation-like state and its body temperature is around 25 degrees Celsius. © 2020 University of Tsukuba

Activating a certain brain circuit causes mice and rats—non-hibernating animals—to enter a hibernation-like state, RIKEN biologists have discovered1. This finding could have implications for other non-hibernating mammals, including humans, and it might eventually find application in space travel and the transportation of seriously injured patients.

Many mammals, from hamsters to bears, survive the harsh temperatures and food scarcity of winters by hibernating. Hibernation is essentially an energy-saving mode since it lowers the metabolic rate, allowing an animal to expend much less energy than normal. “Some squirrels when they enter hibernation, their oxygen consumption rate drops to 1% its normal level,” says Genshiro Sunagawa of the RIKEN Center for Biosystems Dynamics Research. “That’s just amazing—I don’t know why they don’t die.”

In 2017, Takeshi Sakurai’s group at the University of Tsukuba made the remarkable discovery that injecting genetically engineered mice with a certain compound lowered their body temperature by about 10 degrees Celsius for more than 12 hours (Fig. 1). This was surprising because it indicated that mice have the ability to either turn off the heater of their body or to lower their body temperature set point—something that was considered to be unique to hibernating animals.

Now, Sunagawa, Sakurai and co-workers have shown that mice and rats lower their temperature set point, as in hibernation. And they have pinpointed the brain circuit that is responsible for causing rodents to enter this hibernation-like state. Specifically, they identified a set of neurons in the hypothalamus—a small region in the brain that regulates body temperature among other things—that induces the hibernation-like state when activated by either injection with the compound or stimulation by light.

If a similar neural circuit exists in humans, it would open up the possibility of inducing low-metabolic states in people. This would have many exciting applications. For example, it could facilitate human space travel. “It takes one and a half years to travel to Mars,” notes Sunagawa. “If we can reduce an astronaut’s metabolism to 10% its normal level, we would reduce the amount of oxygen, food and water they need during the flight by the same amount.”

An application that is closer to home is the transportation of sick patients to and between hospitals. This possibility first got Sunagawa interested in hibernation. “I used to be a pediatrician and sometimes there were kids who were too sick to be transferred to a hospital with the facilities they needed,” he recalls. “In those cases, we had to give up treating them—it was heartbreaking.” If patients could be induced into a lower metabolic state, it would become safer to transport them.