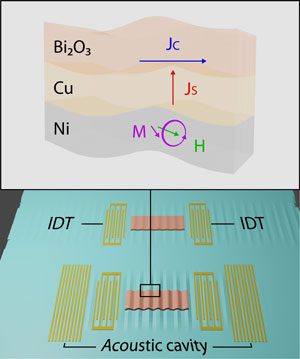 More-efficient memory-storage devices are one potential application of a discovery by RIKEN physicists of a convenient way to enhance the output of a device that converts sound waves into a flow of electron spins1.

Conventional electronic devices operate by shunting electrons along wires. The unwanted heat generated by this process both wastes energy and limits how densely components can be packed together in devices.

In contrast, spintronic devices are based on spin current—the flow of the spins (angular momenta) of electrons. Since this does not involve the physical movement of electrons, spintronic devices promise to be much more energy efficient than their electronic counterparts. They will also be smaller since more components can be packed into the same space. 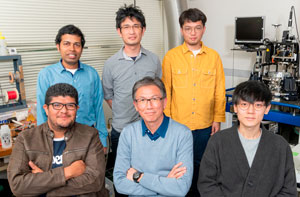 Now, Jorge Puebla of the RIKEN Center for Emergent Matter Science, Yunyoung Hwang of the University of Tokyo, and four co-workers have solved this problem by placing the whole setup between two acoustic ‘mirrors’ that reflect sound waves heading in the wrong direction back toward the three-layer stack (Fig. 1).

Because this arrangement doubles the acoustic energy that reaches the three-layer stack, the team was expecting to double the spin current. But they got more spin current than they had bargained for—they observed a threefold increase. The researchers are unsure where this extra gain in spin current is coming from. “The threefold enhancement came as a surprise to us and to be honest we don’t really understand where it is coming from,” says Puebla. “It’s a nice problem to have, but it’s still a bit of mystery. We’re looking into it now.”

The method could help realize memory-storage devices that have low-power requirements. “One of the main applications of spin currents is using them to store data by flipping the magnetization direction of a magnetic material,” explains Puebla. “But the spin current needs to be large enough to do this, and so that is one of our motivations for boosting the spin current.”