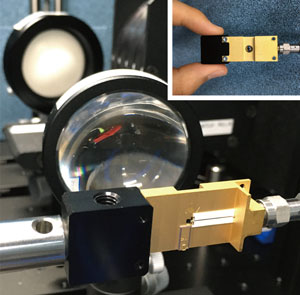 A semiconductor device that is promising for both generating and detecting terahertz radiation has been demonstrated by physicists at RIKEN1. This may aid the development of high-performance integrated solutions for terahertz imaging and sensing applications as well as for high-speed, next-generation wireless communications systems.

Terahertz radiation is electromagnetic waves with frequencies ranging between 0.1 and 10 terahertz. It falls between microwaves and infrared radiation on the electromagnetic spectrum. This range has been dubbed the terahertz gap because it has been underutilized in applications compared to other regions of the spectrum, which have been extensively used in many applications.

One reason why terahertz radiation has not been used much is that it has been traditionally difficult to generate and detect terahertz radiation. But recent years have seen many advances in this area, and terahertz radiation is gathering interest for imaging for airport security and medical purposes as well as for wireless communications systems that use terahertz waves instead of microwaves as the information carrier.

While semiconductor devices known as resonant tunneling diode (RTD) oscillators have been used as terahertz emitters for many years, Yuma Takida and Hiroaki Minamide from the RIKEN Center for Advanced Photonics have now shown that they can also detect terahertz radiation at room temperature. 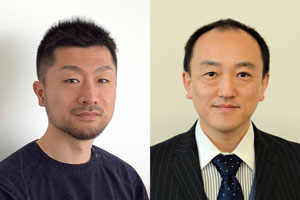 Yuma Takida (left) and Hiroaki Minamide (right) have shown that a resonant tunneling diode oscillator can function as a sensitive terahertz detector.© 2020 RIKEN

“Our result demonstrates that terahertz RTD oscillators can be used as sensitive detectors of terahertz waves,” says Takida. “This promises to accelerate the development of integrated oscillator and detector single chips, which will pave the way toward real-world terahertz applications.”

The RIKEN pair, who collaborated with Safumi Suzuki and Masahiro Asada from Tokyo Institute of Technology, fabricated an RTD that can operate in two detection modes. One of these modes was especially sensitive at detecting terahertz waves, with a performance rivalling that of diode-based detectors.

“RTDs have several key advantages over other detectors,” notes Takida. “These advantages include a wider dynamic range owing to resistance to high input power and a higher sensitivity at room temperature. Furthermore, we have shown that a single RTD device can be used as both an oscillator and a detector at terahertz frequencies.”

Takida says that the growing demand for terahertz technology and progress in semiconductor technology made the work possible.

The team anticipates that optimizing the design will allow devices to be fabricated that operate anywhere in the 0.1–2 terahertz region. Future work will focus on improving the sensitivity of their RTD detector and demonstrating integrated solutions for broadband heterodyne mixing at terahertz frequencies.