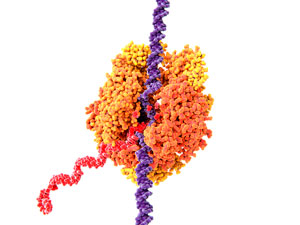 New insights into what causes neighboring, genetically identical stem cells in mouse embryos to behave differently in terms of the proteins they produce could have implications for regenerative medicine and the early detection of cancer1. Cells are like miniature factories that produce proteins that organs need to function. This production process begins with the copying, or transcription, of DNA into messenger RNA (mRNA).

When viewing lots of cells en masse this transcription seems smooth and continuous. But the situation is very different on a single-cell level, where DNA transcription proceeds in fits and starts. This erratic nature of DNA transcription, which is dubbed transcriptional bursting, is partly why cells with identical DNA in the same environment differ from each other. Despite much research, nobody really knows the molecular mechanisms that cause the fluctuation in gene expression in the cells of mammals.

Now, by analyzing the mRNA produced by single embryonic stem cells from mice, Itoshi Nikaido of the RIKEN Center for Biosystems Dynamics Research, Hiroshi Ochiai of Hiroshima University, and co-workers have identified some of the proteins that play a key role in regulating the kinetics of transcriptional bursting. Specifically, they found that a combination of proteins that bind to promoters and gene bodies, including the polycomb repressive complex 2 (PRC2) and transcription elongation factors, control the timing of transcriptional bursting.

The finding was made possible by a highly reproducible and sensitive method for analyzing mRNA produced by single cells, which was developed by the team in 2018. “This method strongly contributed to quantifying transcription bursting in this study,” says Nikaido.

The team anticipates that their fundamental research could find practical applications. “Our findings and techniques may help to establish efficient methods for inducing the differentiation of pluripotent stem cells, such as human iPS cells, into specific cell types,” says Nikaido. “Thus, they are expected to be applied to regenerative medicine.”

Another possible application is cancer. “Since we know cellular heterogeneity that does not involve genetic mutations occurs when cancer cells grow in the body, we’re applying these methods to study the origin and evolution of cancer,” says Nikaido. “This research could lead to the development of diagnostic techniques for the early detection of cancer.”