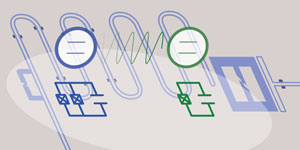 Figure 1: A superconducting quantum element (blue circuit on left) acts as a saturable filter, reducing the decoherence of a superconducting qubit (green circuit on right) as well as avoiding the need to use a high power for rapid control.© 2020 RIKEN Center for Emergent Matter Science

In principle, any physical system with two energy levels can operate as a qubit—the memory element of a quantum computer. To work as a qubit, however, the system must be able to maintain its quantum properties for considerably longer than the time it takes for each operation to be performed. This duration is known as the coherence time of a qubit.

Superconducting qubits are one of the most promising qubit systems, in part because they are highly stable with respect to the environment. But to read and write information, a qubit has to be coupled with a control line, which introduces a source of decoherence. This decoherence involves the emission of a microwave photon.

The probability of photon emission can be minimized by turning down the coupling strength to the control line, but this requires using a high-power control signal to realize rapid control, which can affect other qubits in the circuit and generate undesirable noise. There thus exists a trade-off between a long qubit lifetime and the rapid control of superconducting qubits, and this trade-off will become more problematic as the number of qubits is increased. 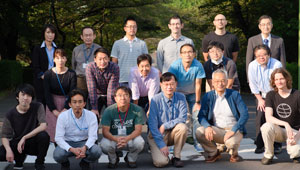 Yasunobu Nakamura (front row, second from the right) and his team have used a superconducting quantum element as a saturable filter to decrease the decoherence of superconducting qubits while avoiding the use of a high power for fast control.© 2020 RIKEN

Now, Nakamura and colleagues have overcome this trade-off by demonstrating that a superconducting quantum element placed close to a qubit can effectively decouple the qubit from the control line by reflecting emitted photons.

The quantum filter consists of a superconducting qubit as well. It can absorb only one photon at a time. So when the qubit emits a photon, the filter can absorb the photon and then reflect it back, effectively suppressing the decay of the qubit. On the other hand, when a control signal with thousands of photons is sent to the qubit, the filter will absorb one photon but becomes transparent to the other photons, which can thus reach the qubit.

Using this quantum filter, the team were able to obtain a huge increase in qubit decoherence time. As a result, the filter reduces the power needed to control a qubit by several orders of magnitude.

The team is now designing a circuit made up of many qubits.