Dark-matter candidate could display stringy effects in the lab 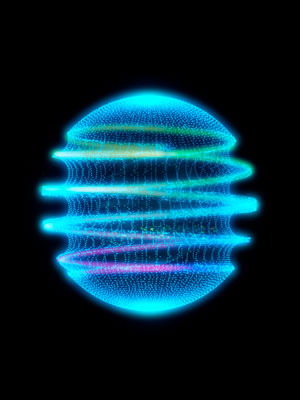 Figure 1: An artist’s impression of an axion, a hypothetical elementary particle, which has been invoked to explain why charge–parity symmetry is preserved in quantum chromodynamics. They have since been proposed as a leading candidate for dark matter. © RAMON ANDRADE 3DCIENCIA/ SCIENCE PHOTO LIBRARY

A hypothetical particle that could solve one of the biggest puzzles in cosmology just got a little less mysterious. A RIKEN physicist and two colleagues have revealed the mathematical underpinnings that could explain how so-called axions might generate string-like entities that create a strange voltage in lab materials1.

Axions were first proposed in the 1970s by physicists studying the theory of quantum chromodynamics, which describes how some elementary particles are held together within the atomic nucleus. The trouble was that this theory predicted some bizarre properties for known particles that are not observed. To fix this, physicists posited a new particle—later dubbed the axion, after a brand of laundry detergent, because it helped clean up a mess in the theory.

Physicists soon realized axions could clear up a cosmic conundrum too. More than 80% of the matter in the Universe is thought to be made up of a mysterious invisible substance, dubbed dark matter. “Axions are a candidate for dark matter, but we have not found them yet,” says Yoshimasa Hidaka, of the RIKEN Interdisciplinary Theoretical and Mathematical Sciences Program. Axions might have the right properties, so physicists have been searching for signs they exist in numerous experiments. In June 2020, the XENON1T experiment at the Gran Sasso Laboratory in Italy reported hints they may have detected the axion—but that result has yet to be confirmed.

But there is another arena where axion properties can be studied. Physicists can prepare exotic materials—called topological insulators—in the lab, which display strange properties, such as conducting electricity on their surfaces while remaining electrical insulators within. Such materials display other weird behavior. Sometimes, their electrons group together and move in such a way that the material appears to be made from ‘quasiparticles’ with unusual properties. This can create an unexpected voltage across the material, called the anomalous Hall effect.

The axion is also predicted to arise in this way, in topological insulators, where it should interact with particles of light, or photons, in a different way to regular particles.

Hidaka and his two colleagues have now examined the theory governing the interaction between axions and photons. Even though axions are point-like particles, the team calculated that within materials, light actually interacts with extended thread-like configurations made of axions, called axionic strings. That would lead to the anomalous Hall effect, which is observed in experiments.

“We have found the underlying mathematical structure for the phenomenon,” says Hidaka.