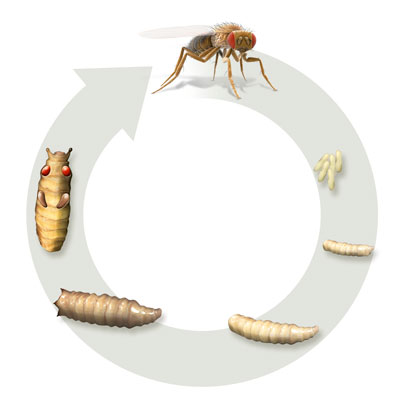 RIKEN developmental biologists have analyzed the transitions that precede metamorphosis in fruit fly larvae using experiments and mathematical modeling1. They have also identified the survival strategies underlying these transitions. While conducted on fruit flies, their study may have relevance for other species, including humans.

To spend now or save for later isn’t a dilemma unique to humans. The larvae of fruit flies also have to decide whether to consume stored nutrients or conserve them for later.

The larval stage in the life cycle of fruit flies is a struggle for survival, and developing flies scramble for nutrients until they reach a certain critical weight. Prior to this maturation checkpoint, starvation essentially arrests larval growth, and many flies perish during this phase. But crossing the critical-weight threshold triggers entry into the pupal stage, and subsequent organ and tissue development proceeds even in the absence of nutrients. However, the metabolic basis of these processes is not fully understood.

Now, Takashi Nishimura at the RIKEN Center for Biosystems Dynamics Research and his colleagues have simulated nutrient management in the developing animal. “We found that an optimal strategy against starvation could be predicted by mathematical modeling that incorporates the actual life history of the fruit fly,” Nishimura says.

The team’s model showed that during the early larval stage, flies respond to starvation by consuming stored nutrients in the interest of immediate survival. But once larvae enter the maturation stage, the response to fasting shifts to a strategy of conserving stored resources, favoring long-term fitness through successful completion of maturation.

Maturation is primarily controlled by steroid hormones known as ecdysteroids. The researchers gained insights into how these signaling molecules modulate shifts in metabolic activity as larvae enter the maturation stage. For example, they observed a clear ecdysteroid-mediated regulation in the storage of glycogen, triglycerides and other essential biomolecules, which can both sustain the developmental progress including metamorphosis and provide essential survival resources for the adult fly in times of scarcity. The team’s analysis uncovered specific enzymatic pathways that affect this metabolic shift during the larval maturation stage.

This finding fills in a critical gap in our understanding of how developing insects maintain their metabolic balance sheet as their bioenergetic demands change in their life cycle.

The study is also relevant to a broader range of animals. Nishimura hopes that their findings will pave the way for future investigations of how other species modulate metabolic activity over the course of development. “Many organisms have similar checkpoint systems, including mammals,” he says. “However, it’s unclear what pathways allow this maturation—for example, in humans at the beginning of puberty.”