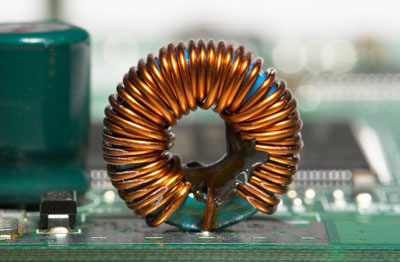 Figure 1: A conventional inductor mounted on a printed circuit board. Inductors have resisted miniaturization until now, but the demonstration of a quantum source of inductance by RIKEN researchers promises to result in much smaller inductors. © GIPHOTOSTOCK / SCIENCE PHOTO LIBRARY

Mobile-phone chargers and other devices could become much smaller after an all-RIKEN team of physicists successfully shrunk an electrical component known as an inductor to microscale dimensions using a quantum effect1.

Inductors are a basic component of modern electrical circuits, and they are used in a wide range of applications including information processing, wireless circuits and chargers for mobile devices. They are based on the law of induction that English physicist Michael Faraday discovered in 1831. But while physics has made great leaps since then, the fundamental principles of inductors remain essentially the same—they are basically coils of wire.

Unlike other electrical circuit components, inductors have been difficult to miniaturize because the size of their inductance diminishes with their volume, such that if you halve their volume, the inductance drops by half too.

Now, Yoshinori Tokura, Tomoyuki Yokouchi and their co-workers, all at the RIKEN Center for Emergent Matter Science, have generated an inductance equivalent to that of commercial inductors but in a component whose volume is about a million times smaller.

They achieved this by using a new mechanism for generating inductance that depends on quantum effects. Inductors based on this mechanism will be easy to shrink since their inductance actually increases with decreasing cross-sectional area.

“We discovered an electromagnetic inductance of quantum-mechanical origin,” says Yokouchi. “This has big potential for the miniaturization of inductors, one of the most fundamental parts in contemporary electric circuits.”

One of the authors, Naoto Nagaosa, had previously theoretically proposed a totally new mechanism for electromagnetic induction based on emergent electromagnetism, a new form of electromagnetism that arises from the quantum-mechanical properties of conduction electrons in specially engineered systems. In the present study, the team realized this effect by using a micrometer-scale magnet. The electron spins that give rise to the magnetism are arranged in spiral-like arrangement, mimicking the coils of a conventional inductor.

Yokouchi notes that the success of the study hinged on the collaborative environment at RIKEN. “Strong collaboration between theorists and experimentalists was essential for this project,” he says. In particular, the experimentalists have a lot of expertise in fabricating advanced quantum materials.

The team’s nanoscale inductor operates only at very low temperatures, so they are now looking for materials that behave similarly at high temperatures. “For actual applications, we have to find a material generating emergent inductance at and above room temperature,” says Yokouchi. “We have already started searching for the prospective materials.”