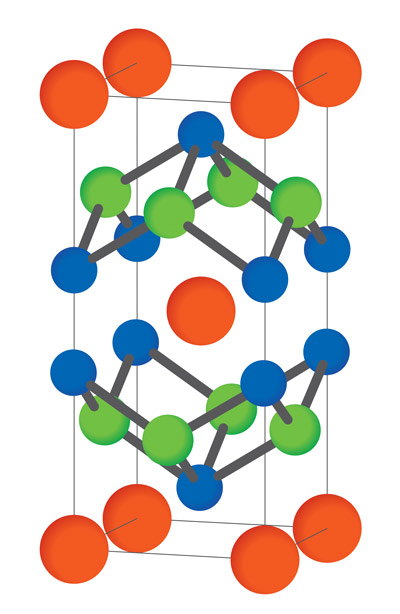 RIKEN physicists have discovered how interactions between electrons can stabilize a repeating arrangement of swirling magnetic patterns known as skyrmions, which could help to further exploit these structures1.

The spin of an electron causes it to behave like a miniature magnet. In a skyrmion, many of these spins are arranged in a swirling pattern that resembles a tiny tornado. Skyrmions are highly promising as a means of carrying information in a new generation of high-density, low-energy data-storage devices.

Skyrmions behave as if they are distinct particles, and multiple skyrmions can arrange themselves into a regular grid within certain types of material. But researchers are still debating how these stable skyrmion lattices form.

To discover more about skyrmion lattices, Yuuki Yasui at the RIKEN Center for Emergent Matter Science and colleagues studied a metallic material called gadolinium ruthenium silicide (GdRu2Si2; Fig. 1). Electrons in the material’s gadolinium atoms are largely responsible for its magnetic properties, while the ruthenium atoms contribute ‘itinerant’ electrons that are more mobile.

The team had previously found that by applying a magnetic field to the material, they could create a square lattice of skyrmions arranged in a grid pattern at intervals of about 2 nanometers. In the new study, they used a technique called spectroscopic-imaging scanning tunneling microscopy (SI-STM) to study the itinerant electrons in GdRu2Si2.

The researchers suggest that these interactions could play an important role in the formation of the square skyrmion lattice. “The proposed mechanism stabilizes skyrmion lattices,” says Yasui.

The team also performed theoretical calculations, based on the interactions between localized and itinerant electrons, to predict the distribution of itinerant electrons in the material under different magnetic fields. These distributions were very similar to the patterns observed by SI-STM, lending support to the mechanism proposed by the researchers.

In addition to providing clues about how skyrmion lattices are stabilized, the research shows that SI-STM can be used to indirectly monitor the behavior of skyrmions. “This could provide researchers with a useful tool to study skyrmion lattices in other materials,” says Yasui.