Polypeptide self-assembly directed by the addition of cosolvents 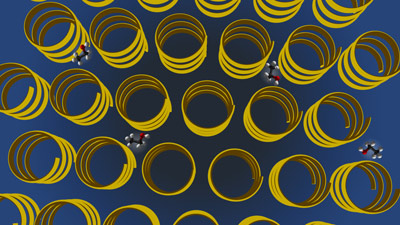 Very different nanostructures are formed through the self-assembly of a polypeptide depending on which of two cosolvents is added to the reaction mixture, three RIKEN chemists have shown1. This discovery is of fundamental interest—offering fresh insights into the ways that nature guides the self-assembly of complex structures such as proteins. It could also have practical applications—suggesting new possibilities for controlling the structures and properties of synthetic self-assembling systems.

In biology, natural small-molecule cosolvents called osmolytes play a key role in many reactions. Specifically, they help to direct the self-assembly of many structures, such as the folding of proteins into their functional three-dimensional shapes. Osmolytes are thought to alter the relative stabilities of certain folded or unfolded states, but the exact molecular mechanisms by which they work are often unclear.

To clarify some potential mechanisms, Motoki Ueda and two colleagues at the RIKEN Center for Emergent Matter Science have examined the way cosolvents influence the self-assembly of a polypeptide, S30L12, that has both water-attracting (hydrophilic) and water-repelling (hydrophobic) parts.

“Molecular assemblies of peptides can be regarded as a kind of protein model,” Ueda says. The self-assembly of S30L12 into a nanotube structure is driven only by the hydrophobic interaction between neighboring peptides. “We anticipated that this polypeptide would enable a simple discussion about the relationship between the cosolvent effect and the self-assembly behavior,” Ueda says.

The trio compared the influence of two cosolvents, ethanol and acetonitrile, on S30L12’s nanotube-forming behavior in water.

The team had to observe the self-assembling system over several months to understand the subtle forces at play. “Since these forces are tiny, we had to detect the slightest morphological changes by patiently observing the growth or dissociation of the assembly,” Ueda notes. For example, the team had to wait a month to show that adding 10% ethanol produced longer nanotubes than adding 1% ethanol.

“Our results will help to correlate the mechanistic behavior of osmolytes on proteins,” Ueda explains. They may also open new possibilities for using small organic molecules as cosolvents to influence biomimetic polypeptide assembly. “We could develop a wide range of cosolvent molecules to fine tune the size, length and physical properties of polypeptide assemblies,” says Ueda.

The team is continuing to examine cosolvents to probe other aspects of the biological functions of osmolytes.