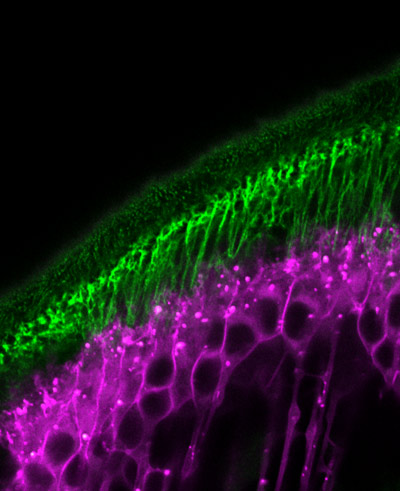 Two proteins play a key role in the development of flight muscles and their tendons in fruit flies, two RIKEN developmental biologists have shown1. Their study reveals how the components of the muscle–tendon system develop in sync with each other, thereby avoiding catastrophic results.

During the development of an animal, its cells construct non-cellular structures outside of themselves called the extracellular matrix—a complex mesh of proteins and polysaccharides that provides physical scaffolding for cells and also helps regulate cell growth and differentiation.

While biologists know a lot about the internal mechanisms of cells and how they are assembled into tissues, they know comparatively little about how cells secrete materials and assemble them into external structures such as the extracellular matrix, says Shigeo Hayashi of the RIKEN Center for Biosystems Dynamics Research (BDR). “The construction of extracellular structures is an engineering challenge, especially at the very small scale of molecular assembly,” he explains. “This is why my group is studying the assembly mechanisms of the extracellular matrix.”

Now, by looking at mutant fruit flies, Hayashi and Wei-Chen Chu (also of BDR) have uncovered the roles two proteins—Dumpy and Quasimodo—play in the development of the extracellular matrix that forms between the tendons attached to a fly’s flight muscles and its exoskeleton during the pupal stage.

The flight muscle is the most powerful muscle in the insect body. It is critical that the tendon develop in step with the muscle because otherwise the muscle will pull the tendon away from the exoskeleton, resulting in a flightless fly.

Hayashi and Chu discovered that an extracellular matrix made of Dumpy filaments anchors the tendon cells to the hard exterior layer of the pupa. During development, tension generated by the flight muscles causes this extracellular matrix to remodel and form nanoscale filaments, increasing the strength of the matrix. “We found that stimulus from the muscle promotes tendon development and that, in this way, the tendon develops in tandem with the muscle.”