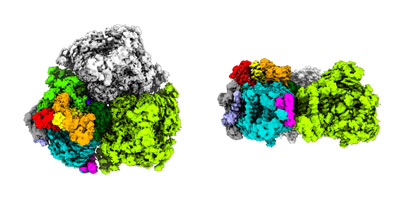 A high-resolution structural analysis by RIKEN biochemists of photosystem I, which contains chlorophyll d and pheophytin a, the light-absorbing pigments found in a marine bacterium, could help scientists discover how the microbe survives in the low-energy light conditions of the deep sea1.

In photosynthesis, plants, algae and some bacteria harness energy from sunlight to create oxygen and carbohydrates from carbon dioxide and water. Chlorophyll, the pigment responsible for giving plants their green color, plays a major role in absorbing sunlight and converting it into a useful form of chemical energy.

Scientists used to believe that photosystem I, the membrane protein complex present in all aerobic organisms, utilized a form of chlorophyll called chlorophyll a for photosynthesis. But that changed when a marine cyanobacterium was discovered in the 1990s that employs a different form of chlorophyll; Acaryochloris marina uses chlorophyll d to harness far-red wavelengths of light, whose energy was previously considered to be too low to be useful for typical organisms.

“How A. marina uses low-energy light for photosynthesis has been a long-standing question,” notes Koji Yonekura, who leads the Biostructural Mechanism Group at the RIKEN SPring-8 Center. 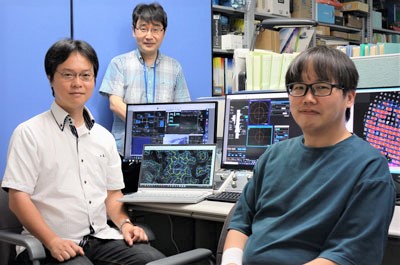 Now, Tasuku Hamaguchi, Keisuke Kawakami, Yonekura and their colleagues have shed light on this question by analyzing the structure of the photosystem I reaction center—the part of chlorophyll that converts sunlight into a form of chemical energy that can be used by the rest of the photosynthetic machinery—of chlorophyll d in A. marina (Fig. 1). They realized this by using cryo-electron microscopy at a higher resolution than has been applied to look at these protein complexes before.

The researchers’ analysis revealed that one of the light-harvesting pigments is pheophytin a, a metal-free chlorin that differs from other type I reaction centers. This exquisite combination of pheophytin a and chlorophyll d helps to explain some ways that the cyanobacterium can efficiently harness the low energy of far-red light for photosynthesis.

The researchers realized the unprecedented resolution in this study by using a cryogenic electron microscopy producing superior high-resolution images with a highly coherent electron beam.

The team intends to continue their research of this mysterious organism and its method of converting light into chemical energy. They are also applying the same technique to investigate other biological macromolecules. “We’re performing high-resolution single-particle cryogenic electron microscopy of other biologically important targets,” says Yonekura.