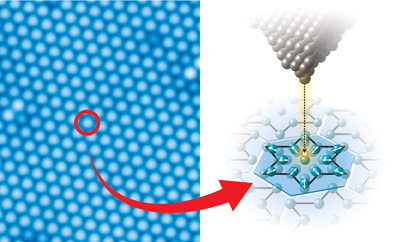 In a finding that will give theorists plenty to ponder, an all-RIKEN team has observed an unexpected response in an exotic material known as a Mott insulator when they injected electrons into it1. This observation promises to give physicists new insights into such materials, which are closely related to high-temperature superconductors.

Neither a chunk of silicon nor a Mott insulator conduct electricity—but for very different reasons. In silicon, electrons are tightly bound to atoms and require a lot of energy to become mobile conduction electrons. In contrast, in a Mott insulator, electrons may not be strongly bound to the atoms, but their movement is instead curbed by their mutual repulsion.

The Mott state’s emergence from interactions between electrons leads to unusual properties. “A small excess or deficit of electrons in a Mott insulator can lead to high-temperature superconductivity, which could be of enormous practical value in the future,” says Christopher Butler of the RIKEN Center for Emergent Matter Science (CEMS). “In Mott-insulating tantalum disulphide, electrons are localized not at each atom, but instead on the crests of a pre-existing ‘charge density wave’. Because the charge density wave is rather delicate, the Mott state can easily be tweaked.”

But to harness the potential of this Mott-insulating state and the charge density wave that hosts it, scientists need to better understand the physics connecting them.

Now, Butler and three colleagues, all at CEMS, have added excess electrons to a Mott insulator using the tip of a scanning tunneling microscope (Fig. 1) and observed a surprising response—tunneling spectra showed a sharp feature, a distinct state that set off vibrations in the ionic lattice.

The conventional theoretical model for Mott insulators predicts that the spectrum should be smooth and non-descript. “It was most surprising that we saw such sharp features in our tunneling spectroscopy measurements,” says Butler. “They may indicate that something is going on that is outside the bounds of the usual theory.”

Butler notes that some theoretical calculations do predict sharp features similar to those his team saw, but they involve particle-like entities known as quasiparticles, which are controversial since they are not thought to exist in true Mott insulators. “There are competing explanations for the observation that are less controversial,” says Butler. “But if it eventually turns out that the calculation results indicating the existence of quasiparticles are right, it might shake up the theoretical understanding of Mott insulators.”