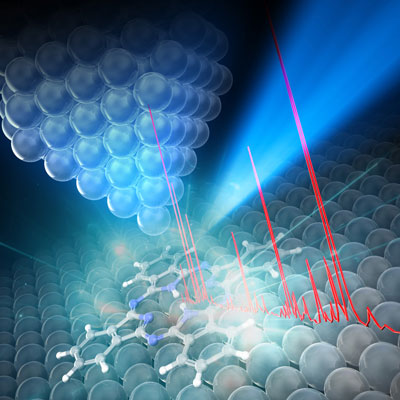 Figure 1: By using a tip of a scanning tunneling microscope (inverted pyramid) and the beam of a tunable laser (blue beam), RIKEN physicists have taken a spectrum (red line) from a single molecule lying on a surface. © 2021 RIKEN Surface and Interface Science Laboratory

RIKEN physicists have taken a spectrum from a single molecule using a new nanospectroscopy technique they developed1. This ability to probe individual molecules will be invaluable for tailoring the properties of organic materials for use in devices such as light-emitting diodes (LEDs) and solar cells.

Light-based spectroscopy methods are useful for investigating excited molecules en masse, but the inability to focus light beams below a certain width makes it challenging to apply them to nanoscale samples. In contrast, electron and scanning probe microscopes can image objects on an atomic level, but they don’t provide the wealth of spectroscopic information that optical methods give. Researchers dream of combining the advantages of both approaches.

Now, Hiroshi Imada of the RIKEN Surface and Interface Science Laboratory and his co-workers have realized this goal by developing a laser nanospectroscopy technique that can acquire a spectrum from a single molecule.

“We combined scanning tunneling microscopy with laser spectroscopy to simultaneously achieve high spatial and energy resolutions,” explains Imada. “That allowed us to reveal the nature of molecules with unprecedented precision.”

The team demonstrated the sensitivity of this method by taking two molecules that differed only slightly: at the center of one molecule, two hydrogen atoms each had an additional neutron. The nanospectroscopy technique could detect this tiny mass difference between the molecules.

Their technique uses a laser beam to drive the electromagnetic field of a plasmon—electrons in a metal vibrating in concert—that forms between the tip of a scanning tunneling microscope and the metal substrate where the sample is located. Since the plasmon is a mere two nanometers in diameter—roughly 100 times smaller than the narrowest width of a focused laser beam—the technique’s spatial resolution is very high.

Using the precise nanospectroscopy, the team also found a novel way to tune the energy levels of single molecules by applying a static electric field. “The resonance energy of a single molecule can be tuned by applying a voltage,” says Imada. “This mechanism, which hadn’t been visualized previously, emerged unexpectedly as a result of symmetry breaking at the molecular level.”