By amassing in high-density regions, dust grains avoid drifting toward the star they are orbiting 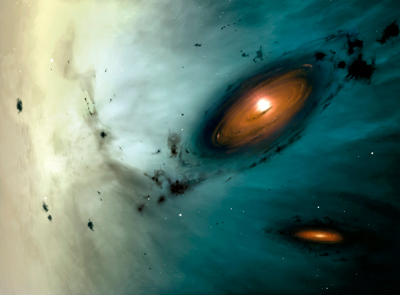 A key step in the formation of new planets may have been uncovered by a new theoretical model of a protoplanetary disk developed by a RIKEN astrophysicist and two collaborators that explains how dust in the disk overcomes a tendency to drift toward the star1.

Planets are birthed from a swirling disk of dust and gas that surrounds a young star, but it is unclear how dust grains can grow into larger objects before they spiral inward toward the star.

In the classical theory of planet formation, minuscule dust particles collide and stick together to form centimeter-sized grains. These grains gradually build up to form kilometer-sized planetesimals, the first major step in producing a new planet.

Previous studies have suggested that this effect should prevent the grains from forming objects larger than a meter, which poses a major conundrum for astronomers. “Various mechanisms have been proposed to explain the formation of planetesimals, but they are still under debate,” notes Ryosuke Tominaga of the RIKEN Star and Planet Formation Laboratory.

Tominaga and two colleagues have now proposed a model that suggests a possible solution to this problem—small variations in the distribution of dust in the protoplanetary disk are quickly amplified into regions of high and low dust density.

In areas having slightly higher densities, dust coagulates more efficiently, and it forms larger clumps that drift toward the star more quickly. When these clumps meet smaller dust particles, they form regions of even higher dust density, accelerating grain growth. Meanwhile, the regions vacated by the large clumps end up with relatively low densities.

The team found that this positive feedback creates multiple bands of high and low dust density in the protoplanetary disk. These bands can arise in a matter of 10,000 years or so, a remarkably short time for such astronomical processes. These high-density areas are ideal sites for further aggregation, allowing planetesimals to form before the dust grains are pulled into the star.

“Unlike previous theories, this coagulation mechanism works even when there is far more gas than dust in the protoplanetary disk,” says Tominaga.

The team is now working on more-detailed models that include the formation and evolution of the disk itself, along with the eventual formation of planetesimals.