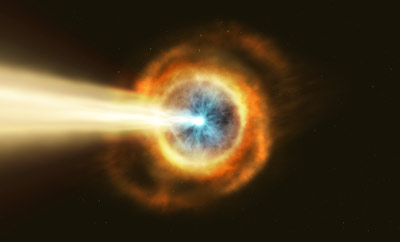 Figure 1: The presence of surprisingly high-energy gamma rays seen in the afterglow (artist’s impression) can be explained with the help of a new theoretical model developed by RIKEN researchers. © 2022 ESA/Hubble, M. Kornmesser

The presence of unusually energetic gamma rays seen in some afterglows from intense gamma-ray bursts (GRBs) could be explained by a new mathematical model developed by RIKEN researchers1. This finding could help to shed light on the origin of GRBs.

A GRB is a spectacular eruption of energy produced by violent events such as the explosive death of a massive star, or the collision of two neutron stars. A GRB also shoots a jet of matter and energy into the material that surrounded the star, shocking particles such as protons and electrons and causing them to emit radiation. The emitted photons, ranging from radio waves to gamma rays, can be detected from Earth as a GRB afterglow.

The vast majority of GRB afterglow observations can be explained by current theories, which should come as no surprise: they wouldn’t be the current theories if they didn’t match reality. But the afterglows of two recent GRBs produced gamma rays with unusually high energies that strain these theories. “The surprise with these two bursts was that we had never detected photons this energetic before,” says Donald Warren of the RIKEN Interdisciplinary Theoretical and Mathematical Sciences Program (iTHEMS). 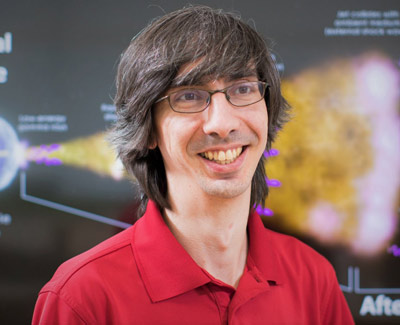 Donald Warren and his co-workers have developed a mathematical model that could explain the presence of unexpectedly energetic radiation seen in some gamma-ray-burst afterglows. © 2022 RIKEN

To explain the unusual gamma rays, the researchers compared two theoretical models of afterglows. The first was based on conventional theory, suggesting that the distribution of energy among the shocked electrons follows a fairly simple curve, known as a power law distribution. In this scenario, most electrons have relatively little energy, and only a few have the highest energies. It’s important to keep a sense of perspective though. “Even the low-energy electrons here would be kings of the energy pile in the Solar System,” Warren comments.

Their second model added some so-called thermal electrons into the mix. These have a different energy distribution, which resembles the way that molecules in a hot gas share out their energy.

The second model features more electrons at just the right energy to generate the high-energy gamma rays seen in the afterglows of the two highly energetic GRBs. “The most important conclusion in the paper is that thermal electrons significantly boost the emission you get at the very highest photon energies,” says Warren.

That means the second model potentially offers a better description of these GRB afterglows. “The next step is to use this new model to estimate the parameters of a few GRBs, to make sure it fits observations at least as well as the current model,” says Warren. This could ultimately help astronomers to refine their theories about how GRBs themselves occur.