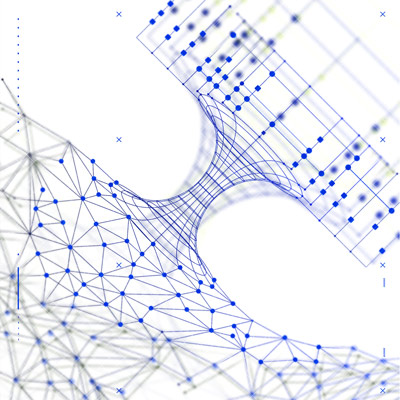 Figure 1: RIKEN researchers have used quantum computing (represented by lines, squares and circles in the top right of the image) and deep learning (depicted by graph points in the bottom left of the image) to perform calculations using quantum gravity theories. © 2022 Enrico Rinaldi/University of Michigan, RIKEN and A. Silvestri

RIKEN physicists have put quantum computing and deep learning through their paces and found that they are powerful tools for gleaning insights into new theories of quantum gravity1. They could thus help solve one of the most formidable challenges in modern physics—developing a theory of gravity that jives with quantum physics.

When Einstein nutted out his theory of general relativity in 1915, his only tools were pen and paper. The same was true of the pioneers of quantum theory. But the next major breakthrough in theoretical physics could be made with help from emerging technologies such as quantum computers and machine learning, Enrico Rinaldi of RIKEN Theoretical Quantum Physics Laboratory thinks. “I believe these technologies are poised to transform the way we do theoretical physics,” he says.

Both general relativity and quantum physics are incredibly successful at describing different aspects of physical reality. The only snag is that they are incompatible with each other. This keeps theoretical physicists up at night because it means that our understanding of reality is incomplete, and there is a more comprehensive theory waiting to be discovered.

There has been a sustained push to derive a quantum theory of gravity. But while many theories have been proposed, it is notoriously difficult to perform even the simplest calculations based on them.

Now, Rinaldi and his co-workers have explored whether quantum computing and deep learning could aid theoretical physicists with these calculations.

They applied the two techniques to problems in holographic duality—theories that relate particles in one system to gravity in a system that has an additional dimension, much like a two-dimensional hologram can create a three-dimensional image. For the purposes of the trial, they picked problems that could be solved by conventional techniques so they could assess the accuracy of the methods.

Both techniques performed well. Of the two, deep learning had the upper hand. “The deep-learning method had the best scaling with resources,” notes Rinaldi.

But quantum computing also showed impressive performance. “The biggest surprise was how well the quantum-computing algorithm performed. We just took what was available—so we didn’t know if it would work,” says Rinaldi. “We were surprised how accurate the answers it gave were.”

Rinaldi is encouraged by the recent progress being made in developing theories of quantum gravity. “I really think we’re getting closer,” he says. “There has been a lot of progress in the past two years.”