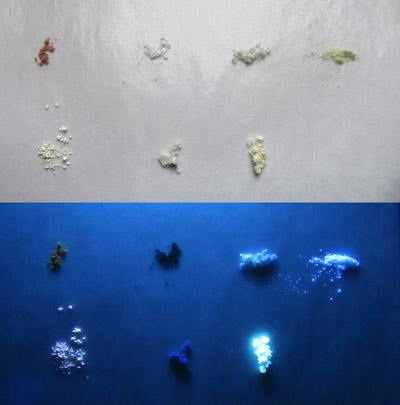 Figure 1: Eight compounds were predicted to fluoresce by a new method for designing molecules. Of the eight, six were found to fluoresce under ultraviolet light (five shown; C, D, E, F, G), including one compound that hadn’t been previously reported (not shown). © Reprinted with permission of AAAS from Ref. 1. © M. Sumita et al. Distributed under a CC BY-4.0 License

RIKEN chemists have demonstrated a powerful way of designing molecules to satisfy predefined specifications by using it to create six fluorescent compounds1. This method, which combines machine learning and quantum chemistry, promises to save chemists a lot of time making and testing compounds in the lab.

The conventional approach to molecular design is to start with a molecule that has properties close to the desired ones and then to try to improve on it through trial and error. This can be a time-consuming and hit-and-miss affair, as there is no guarantee that the final molecule is the best one.

Chemists have long wanted to reverse the situation so that they start with desired properties and then search all possible molecules for one that fits the bill. But a limitation has been that data only exists for a tiny fraction of all molecules.

Now, Masato Sumita of the RIKEN Center for Advanced Intelligence Project and his co-workers have demonstrated a new strategy that makes it possible to search the universe of molecules without having to make each compound individually. 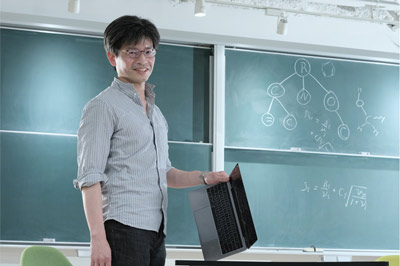 Masato Sumita and co-workers have combined quantum chemistry and machine learning to develop a powerful method for designing molecules. © 2022 RIKEN

They used a de novo molecule generator, which employs machine learning to suggest a molecule based on the desired properties. A simulator that performs quantum chemical calculations was then used to predict the molecule’s properties. The cycle was repeated up to a specified computational time.

To demonstrate the power of this approach, the team used their method to search for molecules that give off fluorescent light at wavelengths visible to the human eye. After five days of number crunching, the computer came up with more than 3,600 candidate molecules. The team picked eight of them to synthesize and found that six of them were fluorescent—including one compound that had never been reported before.

“This is the first time a de novo molecule generator combined with quantum-chemistry calculations has been used to discover fluorescent molecules,” says Sumita. “I was very surprised at the high success rate of the method—75% of the eight candidate molecules fluoresced when we made them in the lab.”

The search for a fluorescent molecule was a rigorous test for the method since, unlike simpler molecular properties such as light absorption, fluorescence is a multi-step process, making it tough to predict from molecular structure.

Sumita and his team now intend to apply their method to other chemical properties and to try to use it to optimize more than one property simultaneously.