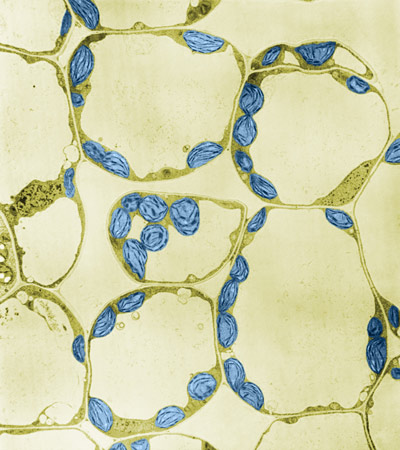 Although life depends on plants for oxygen and food, many aspects of plant science lag behind biomedical science, including the use of molecular probes for imaging the internal structure and activities of cells. Shuhei Kusano of the RIKEN Center for Sustainable Resource Science (CSRS) and his co-workers are seeking to close this gap by developing a new range of fluorescent dyes with impressive abilities to visualize key parts of plant cells.

One approach to making cell structures visible to microscopy involves using genetic engineering to create fluorescent proteins in structures of interest. But this is very time consuming for plant cells as it usually takes at least six months to establish stable genetically modified versions of even the most easily manipulated plants.

Another approach is to expose cells to fluorescent dyes that will selectively accumulate in regions of interest, such as the various membrane-bound components of cells called organelles. But this has proved more challenging in plants than in animals, partly because the plant cell wall, which largely consists of cellulose, poses a much greater barrier than the cell membrane in animals.

Now, Kusano and three colleagues, all at CSRS, have tackled this challenge by exploring chemical modifications to strongly fluorescent dyes based on molecules called 1,8-naphthalimides.

“We discovered that a series of 1,8-naphthalimide dyes could be chemically functionalized to visualize various membrane-bound compartments,” says Kusano. “To our surprise, the probes could permeate across the cell wall and into the target membrane within ten minutes.”

These non-toxic dyes allowed the team to light up and clearly reveal the structure and locations of several compartments inside living cells. The targeted regions included the membranes of organelles called chloroplasts, where photosynthesis occurs, and vacuoles, which store nutrients and other key molecules and host the degradation and removal of waste products.

The team demonstrated practical uses of their dyes by exploring the degradation of chloroplasts in the autophagy process—a crucial part of cell maintenance and turnover.

The team is now working on extending the inventory of dyes. “We’re continuously developing new probes in the hope of visualizing every organelle and a wider range of plant-derived biomolecules,” says Kusano.

Kusano believes that the knowledge gleaned using the dyes will help to improve our use of plants, including as crops and sources of materials, and in the bioremediation of pollutants.