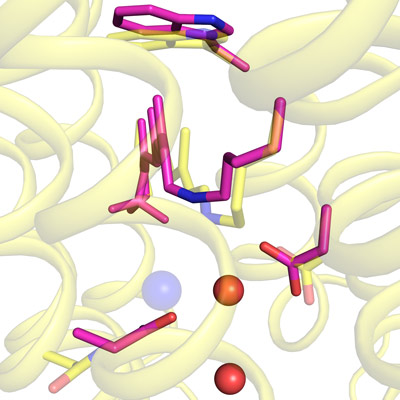 RIKEN biochemists have discovered how a miniscule pump in a marine microbe shuttles negative ions into the cell by changing shape when activated by light1. As well as providing insights into how these ion pumps work, the findings will be useful for improving light-based tools for brain research.

Many bacteria and single-cell algae ferry ions into and out of their cells using pumps that are driven by light. By expelling or accepting ions, these pumps allow cells to regulate their contents relative to their environment. They work by altering their shape when activated by light.

Such light-driven pumps are not just of interest to biochemists; neuroscientists use them to probe brain circuits in animals by turning neurons on and off in response to light. Learning about how these pumps work will enable brain researchers to tailor them for this application.

Light-driven pumps that ferry positive ions across the cell membrane have been extensively studied, but much less is known about the workings of pumps that convey negative chloride ions.

Now, Mikako Shirouzu and Toshiaki Hosaka at the RIKEN Center for Biosystems Dynamics Research, Eriko Nango at the RIKEN SPring-8 Center, and their co-workers have used a powerful x-ray laser—of which there are just a handful in the world—to visualize how the shape of a light-driven pump of chloride ions changes during operation (Fig. 1).

They looked at a chlorine pump from a marine bacterium that is based on the light-sensitive protein rhodopsin—a biological pigment similar to that in the light receptors of the human eye. The team used larger bromide and iodide ions rather than chloride ions because they are more detectable by x-rays.

The researchers discovered that the pump had an intriguing mechanism for preventing chloride ions from returning the way they came. “We were surprised to find that the amino-acid residue Asn98, which interacts with the anion, prevents backflow of the ion after it has passed through,” says Hosaka. “There is thus a simple mechanism to transport just one ion with a single change in shape.”

The results indicate that chloride-pumping rhodopsins employ a common mechanism for moving ions around.

The team intends to study other proteins by first rendering them sensitive to light. “Most proteins aren’t responsive to light, making them difficult to control,” says Hosaka. “In the future, we would like to modify ordinary proteins to make them responsive to light and thereby study the shape changes of a wider range of proteins.”