The shifting currents of superconductors 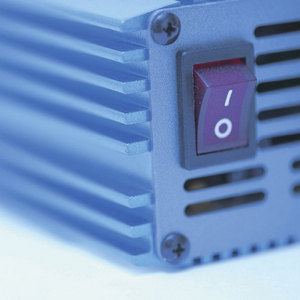 Some superconductors just cannot make their minds up when it comes to electrical current. RIKEN researchers have found that the flow of charge through certain types of fabricated superconducting materials can spontaneously flip between two different values, an unusual effect that could prove useful in developing new electronic devices.

For simple metal wires, a fixed voltage produces a predictable electrical current. Turning up the voltage proportionally increases the flow of charge, just as a higher pressure will force more water through a pipe.

But some semiconductor materials have a strange property called negative differential resistivity—as the voltage increases, currents rise, then fall and finally rise again. This behavior allows some diodes to generate an oscillating current from a fixed voltage. These devices are used to make radio waves, for example, in the car radars that help drivers reverse into tight parking places.

Now scientists at RIKEN’s Frontier Research System in Wako have looked at the equivalent effect in superconducting materials, which can carry current with virtually no resistance. Superconductors are used in a variety of applications, including ones with large magnetic fields used in medical imaging devices.

They used computer simulations of superconducting materials that have a regular pattern of man-made defects within their crystal structures. These nano-fabricated ‘pinning sites’ help to trap magnetic flux within the superconductor, which ultimately helps to improve the flow of current. This in turn boosts the performance of sensitive instruments made from the material.

The team found that a single, fixed voltage could actually induce one of two different current flows through the sample. Under certain conditions, the current will actually cycle between the two values in a regular way, they report in Physical Review Letters 1.

This indecisive behavior could actually be useful because it provides a way to switch sharply between different states. Under certain conditions, these two states are stable, and these could eventually be used to represent bits of data in a computer, for example, that are either ‘on’ or ‘off ’. “This binary logic is far more difficult to achieve with linear circuit elements,” says Franco Nori, part of the research team, who is at RIKEN and also at the University of Michigan, USA.

The researchers think that the behavior could be triggered when a uniform current breaks down into separate strands, or filaments within the material, which have different current densities. Understanding the effect gives scientists the ability to ‘sculpt’ the shape of the current-voltage response of the material, and this should allow them to manipulate magnetic flux in these devices in the same way that semiconductors manage the flow of electrons, Nori adds.