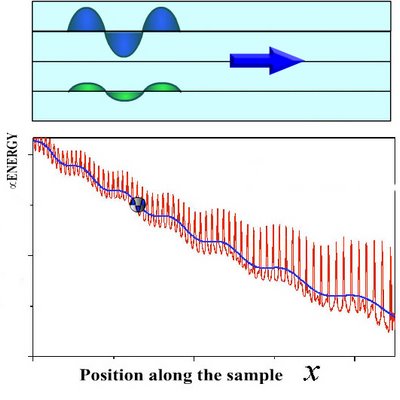 Figure 1: Layered superconductors (top) could be tailored so that strong terahertz waves (blue) amplify weaker waves (green) as they pass through the material, producing the altered wave profile illustrated in the graph.

Layered superconducting materials can control a form of high-frequency radio waves, known as terahertz waves, according to calculations by RIKEN scientists.

Terahertz waves are a form of electromagnetic radiation, just like visible light and microwaves, but with a frequency somewhere between the two. They have a wide range of potential uses, such as in medical imaging and security scanning, but there are still very few reliable ways of generating and controlling the waves.

Superconducting materials could hold the answer, according to a team of physicists led by Franco Nori of RIKEN’s Frontier Research System, Wako, and the University of Michigan, USA.

Their calculations suggest that as terahertz waves pass through layered superconducting materials, it should be possible to amplify the rays, transform continuous waves into amplified pulses, or even slow the rays down.

Creating terahertz pulses may prove useful in real-time medical imaging, for example, so that doctors could watch the progress of keyhole surgery from any angle outside the patient’s body. “Pulses or snapshots can readout instant information, producing sharp pictures, in contrast to the ‘fuzzy’ pictures seen with continuous terahertz radiation,” says Sergey Savel’ev, part of the RIKEN research team, who also does research at Loughborough University, UK.

The superconductors’ behavior is analogous to certain crystals used to control visible light, explains Nori. This means that under certain circumstances, “these waves can self-focus, instead of dispersing as usual”, he says. The team’s predictions are reported in Nature Physics1 .

Superconducting materials without layers do not allow terahertz waves to pass through. But scientists already have access to superconductors that naturally contain layers of copper oxide just a few atoms thick, surrounded by other metals such as strontium, bismuth and calcium. Artificially layered materials could even be tailored to control particular terahertz frequencies, says Savel’ev (Fig. 1).

The team now hopes that their prediction will be experimentally tested by other researchers. “In the past, there were several attempts to experimentally study nonlinear effects in superconductors,” says Savel’ev. “But there was no guidance about what to look for. Hopefully our article provides such a guide.”