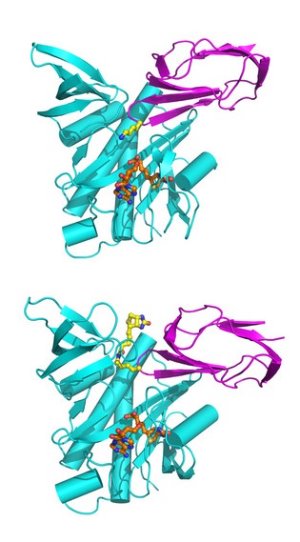 Figure 1: The crystal structure of the complex between the activation enzyme, BPL (cyan), and BCCP (magenta), a fragment of a key enzyme in the production of fatty-acids. The structures show how BPL activates BCCP: before reaction (upper) and after reaction takes place (lower).

A team of scientists from Japan has determined the structure of a protein complex known to be important in metabolic syndrome, which describes people who may be obese or have high blood pressure and are at risk from heart disease and stroke. Metabolic syndrome affects around one in four adults in the western world.

All organisms convert and store excess calories as fatty-acids for use during times of famine or emergencies. However it is this storage system in humans that can lead to weight gain and increased blood pressure resulting in metabolic syndrome.

A key enzyme in the production of fatty-acids is acetyl-CoA carboxylase (ACC). Biotin carboxyl carrier protein (BCCP) forms part of this ACC molecule that is activated by another enzyme known as biotin protein ligase (BPL). One possible approach to treatments for metabolic disorder would be to interfere with the activation of the BCCP fragment of ACC preventing the formation of fatty-acids and avoiding obesity.

To enable development of treatments scientists need a complete understanding of what the activation complex looks like between the fragment BCCP and the activation enzyme BPL. Now, Naoki Kunishima and colleagues from the RIKEN SPring-8 Center in Harima have successfully determined the structure of this key complex1.

It is clear from the extent of the study by Kunishima and the team that determining the structure of this complex has not been easy. Complexes such as this one are inherently unstable as they are essentially intermediates in a reaction. Previous work from the group determined the structure of BPL and, using this information, the group designed eight mutants that could potentially form a complex but would only react slowly with BCCP.

After a considerable number of trials, a few of the mutants formed crystals that were analyzed using specialist synchrotron radiation facilities capable of solving very detailed structures. Referring to Figure 1, Kunishima notes “in one of the crystals, surprisingly, we observed two different states of BCCP activation: one of the complex in the [unactivated] state before the reaction and the other complex showed the activated state after the reaction.”

Kunishima and the team are planning two new projects as a result of this research. The first project will investigate complexes of other protein mutations to create a general method to assist the structural determination of difficult target proteins. In the second project, the team will look to develop drug targets to treat metabolic syndrome.