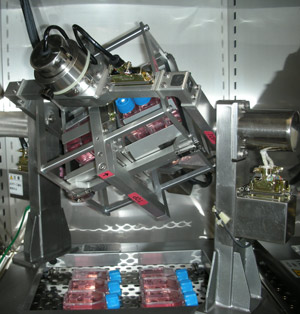 Despite other challenges, biological difficulties may be the primary obstacle to successful mammalian reproduction and development in orbit, according to new findings by Teruhiko Wakayama and his colleagues at the RIKEN Center for Developmental Biology in Kobe.

Wakayama’s research is primarily focused on cloning, but he has long sustained an interest in outer space. “I took the exam to be an astronaut more than ten years ago,” he says. Although his career ultimately followed a more earthbound path, an encounter with scientists working in space research provided the opportunity to tackle a long-standing question pertaining to life in outer space: can mammals reproduce successfully in zero-gravity?

Previous studies have demonstrated successful reproduction by fish, amphibians and birds in zero-gravity conditions (also called microgravity), and that already pregnant rats can deliver healthy offspring aboard a space shuttle. On the other hand, experiments from a 1979 mission indicated that rats can get impregnated in space, but are seemingly incapable of bringing these pregnancies to term—although it was unclear at which stage complications arose1.

Now, thanks to an apparatus known as a 3D clinostat (Fig. 1), which simulates microgravity via continuous three-dimensional rotation, Wakayama and colleagues were able to study fertilization and the earliest stages of embryonic development under conditions that replicate space travel2.

They performed in vitro fertilization (IVF) experiments with mouse sperm and ova, both within the clinostat and at regular gravity (1G), and determine that microgravity had minimal effects on fertilization. It may prove detrimental to subsequent development, however. Microgravity-cultured embryos successfully reached the two-cell stage and yielded viable offspring upon implantation into female mice, but at a significantly lower rate than their 1G counterparts. The researchers observed more severe negative effects when embryos were transplanted following longer culture periods in the clinostat.

Microgravity led to an overall reduction in the rate of blastocyst formation after 96 hours of culture, and closer examination of these blastocysts revealed that the differentiation of embryonic cells into trophectoderm—the tissue that nourishes the embryo and ultimately contributes to placenta formation—was markedly impaired.

Given the successful development of non-mammalian embryos in microgravity, these findings were surprising, and Wakayama and colleagues intend to pursue further gravity-manipulation studies to zoom in on the source of the developmental problem. “We are planning to perform similar experiments at different gravities, such as Moon gravity (1/6G) or Mars gravity (1/3G),” he says. “I want to know how much gravity is necessary to perform normal reproduction.”