By determining how different proteins combine, researchers get a better handle on the complexes that help cells to move their internal cargo 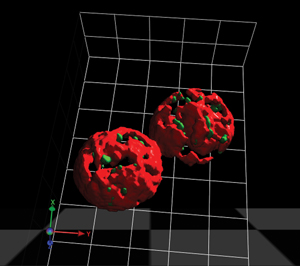 Many proteins undergo processing within cellular compartments called the endoplasmic reticulum and the Golgi apparatus. Transit between these structures is facilitated by transport vesicles, which bubble out from the membranes of these compartments with the help of specialized coat proteins (Fig. 1). While most proteins, or ‘cargo’, marked for transport are gathered up by direct interaction with the coat proteins, some only interact with coat proteins through intermediary ‘cargo receptor’ complexes.

Akihiko Nakano, Ryogo Hirata and colleagues from the RIKEN Center for Advanced Photonics have now revealed the composition of these cargo receptor complexes—an important starting point for understanding their distinct roles1. “It remains largely unknown how cargo receptors recognize their specific cargo proteins,” explains Hirata, “because only small numbers of cargo-receptor-dependent cargo proteins have been identified.”

The researchers focused on the p24 cargo receptor complexes, which contain either two or four protein subunits. Yeast cells have eight known p24 proteins, representing four subfamilies. These include single p24β and p24δ proteins, both mandatory for p24 function, and three different p24α and p24γ proteins each. As the relative contribution of each of these latter proteins was unclear, Hirata and his colleagues generated yeast strains lacking different combinations of p24α and p24γ. The loss of any single subfamily member only had a mild effect, but the loss of two, or all three, proved much more disruptive to transport, demonstrating an important contribution from these subfamilies. “We showed that the major functional p24 complexes are tetramers containing one each of an α, β, γ and δ subunit,” says Hirata. The researchers also discovered an additional p24δ subunit—Rrt6—which had been identified in previous research as a protein of unknown function.

To further dissect these complexes, the researchers examined how the subunits preferentially interact with each other and determined that only 6 out of the 18 possible α–β–γ–δ combinations typically assemble within yeast cells. Preliminary analysis suggests that there is considerable overlap in the function of these various complexes, but Hirata notes that distinct roles may emerge as new cargoes are identified. “We are now trying to identify isoform-specific cargo proteins,” he says. “We have found a few candidates from past p24 studies and are going to examine these first.” In the meantime, Hirata believes that the results will offer valuable guidance for future functional studies by giving researchers a useful schematic for how the various p24 subunits actually assemble within the cell.