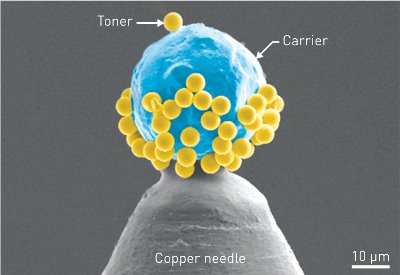 Electrophotography techniques such as laser printing or photocopying involve the transfer of charged microparticles of toner or ink onto a rotating drum using electric fields. The microscopic electrostatic interactions between these particles and the drum greatly affect the print quality. Visualizing the electric fields around these charged particles, however, is difficult due to the small size of the particles and the complexity of their arrangement.

A research team led by Toshiaki Tanigaki and colleagues from the RIKEN Center for Emergent Matter Science has now demonstrated a holographic imaging technique that can map the electric fields around such complex systems of charged particles at microscopic scales1.

Tanigaki and his co-workers used an imaging technique known as split-illumination electron holography (SIEH) to study toner particles 5 micrometers in diameter attached to a carrier particle—a 38-micrometer polystyrene sphere (Fig. 1). The method involves splitting a beam of electrons into two separate paths; one beam passes near the toner microparticle and interacts with the electric field in the particle’s vicinity, while the other is preserved as a reference beam. The small electric fields around the microparticles become obvious when the probe beam is mixed with the reference beam to create a hologram. In this way, the team was able to compare the electrostatic potential in the vicinity of both positively and negatively charged toner particles.

The difficulty in such an experiment is ensuring that the reference electron beam is unaffected by the charged toner particles—a problem that has prevented accurate visualization of electric fields in such complex microparticle systems in the past. The setup used by Tanigaki and his co-workers overcomes this difficulty by diverting the reference beam sufficiently to avoid any influence from the toner particles. A second important consideration in the development of the SIEH technique was whether the incident beam of electrons would alter the charge on the polystyrene sphere. The team removed this potential source of interference by inserting a masking plate to ensure that the electrons passed near the toner and carrier particle without striking it.

The results of the SIEH experiment highlight the importance of charge transfer between the toner particles and the carrier, which alters the electric field in the region where the two meet. These findings, and the SIEH method itself, are expected to lead to improvements in the quality and resolution of electrophotography printing techniques. “We next hope to apply this technique to analyzing electric fields in other devices,” says Tanigaki.