The shape of spins to come 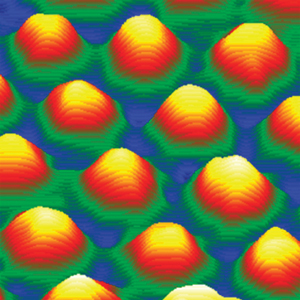 Nanoscale magnetic swirls known as skyrmions can form in certain materials such as thin magnetic films. These tiny vortices pack into dense lattices that are more stable than conventional magnetic domains and can be transported and manipulated with minimal electrical power—features that hold great promise for future information storage applications. To exploit skyrmions in such memory technologies, however, scientists need a deeper understanding of their fundamental properties.

Hyun Soon Park, Toshiaki Tanigaki and colleagues from the RIKEN Center for Emergent Matter Science, in partnership with industrial and academic researchers from across Japan, have now made major progress in this area by conducting the first three-dimensional analysis of skyrmion lattices using an electron holography microscope1.

The RIKEN-led team has pioneered techniques to view skyrmions in two dimensions using techniques that include Lorentz transmission electron microscopy. However, the magnetic structure of skyrmions—defined by the orientation of electron spins—is not flat, and instead involves a three-dimensional distribution of spin orientations to form a true vortex. Analyzing this structure in quantitative detail is difficult because the features are beyond the resolution limit of Lorentz microscopy and can be obscured by the inherent roughness of the film’s surface.

Electron holography, a technique for generating three-dimensional visualizations from interfering electron waves, can be used to resolve magnetic structures with unprecedented detail. Through collaboration with the group of the late Akira Tonomura—a forefather of electron holography—at Hitachi, Ltd, the researchers constructed a high-voltage electron holography microscope with sufficient power to resolve the skyrmion structure.

Using their holographic microscope, the researchers imaged the magnetic structure of a thin iron–cobalt–silicon film while applying a magnetic field. As the magnetic field intensity was increased, they observed a change in the electron spin arrangement from a helical structure to the swirling skyrmion structure. The three-dimensional images revealed that the skyrmions adopt a distinct cylindrical shape with an eerily beautiful interior pattern (Fig. 1). Intriguingly, this magnetic vortex switches from right- to left-handed as the direction of the applied magnetic field is changed.

Park notes that skyrmions with cylindrical spin configurations can be expected to provide more effective spin transfer torque—a critical factor in transporting skyrmions for data storage applications. He is also confident that high-voltage electron holography has enormous potential to resolve many of the uncertainties associated with spintronic devices. “Seeing complex magnetic structures with high precision or in three dimensions is key to understanding these systems,” he notes.