A magnetic memory bubbling with opportunity 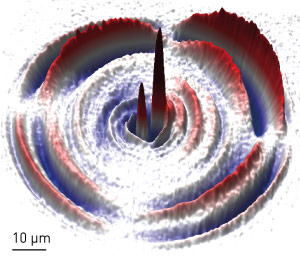 New technology that exploits the spin of electrons, known as spintronics technology, requires rapid and non-invasive methods to manipulate magnetic fields without generating excess heat. Current approaches focus on the interfaces, or ‘domain walls’, between regions with different ferromagnetic spin—applying a spin-polarized electric current, or spin wave, to such areas produces a twisting force that can be used to flip magnetic bits on or off.

The recent discovery of skyrmions—nanoscale, vortex-like magnetic textures that are more stable and information rich than conventional domains—has heightened the demand for improved control over small-scale domain walls. Ultrafast laser pulses are promising for achieving this control since they can generate effective magnetic fields at the desired location with a sub-micrometer spatial resolution. But they usually only excite a fraction of magnetic sites due to the weak interaction between light photons and spin.

The researchers tested their concept on films of iron garnet, an insulator known for its long-lived spin waves and distinctively shaped domains, which include narrow stripes and ‘magnetic bubbles’—cylinder-like domains that exhibit similar properties to skyrmions. On spotting a bubble domain with their microscope, the team focused a laser spot close to it and then gradually increased the laser power. Eventually, they generated magnetoelastic waves that were so powerful that the domains followed the laser spot by moving against the collective spin propagation.

This technique also worked on stripe domains, causing them to kink in the middle, or, if an endpoint was targeted, to stretch and bend in the film. “These interactions really depend on the curvature of the domain walls,” explains Ogawa. “Smaller structures with steep curvatures such as bubbles can be manipulated easier than larger domains.”

The team notes that magnetic bubbles, which were deployed in nonvolatile memory devices in the 1970s, can now help establish the rules for manipulating skyrmions at the nanoscale. “This work is a proof of concept: it shows that magnetoelastic waves have the potential to deliver enough force to magnetic domains,” says Ogawa.