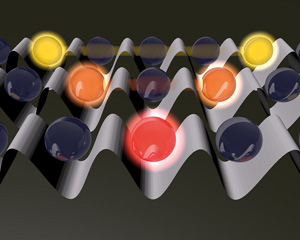 Figure 1: Researchers initially excited one atom in a row of spin-down atoms to a spin-up state (red sphere) and then observed that entanglement propagated through the row as a function of time (orange and yellow spheres). © 2015 Takeshi Fukuhara, RIKEN Center for Emergent Matter Science

The weird phenomenon of quantum entanglement has been observed between individual atoms in a laser-generated array of atoms for the first time1.

Entanglement occurs when two or more quantum particles interact with each other in such a way that their quantum states become mutually dependent. It can be used to realize communication and computation capabilities that qualitatively surpass those achievable by classical physics. Entanglement can also give researchers a better understanding of quantum many-body systems, which can lead to the development of new materials and devices.

Now, Takeshi Fukuhara of the RIKEN Center for Emergent Matter Science, along with collaborators in Germany and the USA, has observed quantum entanglement in a line of equally spaced rubidium atoms prepared by loading extremely cold (several billionths of a kelvin) atoms into an ‘optical lattice’ generated by a set of standing laser waves. While entanglement has previously been detected in optical lattices based on average measurements for ensembles of atoms, this is the first time it has been seen between individual atoms.

The atoms could have one of two possible spin states—spin up or spin down. Initially, the researchers prepared all the atoms in the spin-down state. They then promoted one atom to the spin-up state and used a quantum gas microscope to monitor the subsequent evolution of the system. Their measurements revealed a ‘wave of entanglement’ that traveled for up to six lattice sites (Fig. 1).

Fukuhara likens this experiment to giving a ball to a person standing at the center of a line of people. In the classical world, the person can pass the ball to the person on the right or the left. But in the quantum world, they can pass the one ball to both neighbors simultaneously. “In a similar way, we accessed the central atom and changed its spin state,” explains Fukuhara. “This change (or spin excitation) is transferred to both adjacent atoms, like the quantum ball.” By tracking the dynamics of how this excitation propagated at the single-atom level, the researchers confirmed that quantum entanglement is generated and transferred via these dynamics.

The researchers intend to investigate the dynamics of more-complex quantum many-body systems. “In the present study, we used a relatively simple system that can in principle be simulated using classical computers,” explains Fukuhara. “A major goal of our research is to investigate entanglement and its dynamics in more-complex systems, which cannot be solved using classical computers.”