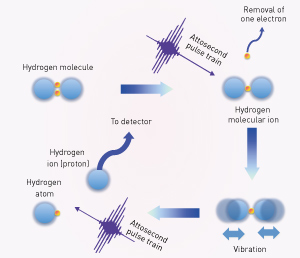 Experiments with ultrafast laser pulses reveal that simply removing an electron from a hydrogen molecule does not complete the full ionization process. Rather, there is a subsequent ‘settling’ process that occurs over a much longer time scale than previously thought, a RIKEN study finds1.

When it comes to molecular ions, they don’t come any simpler than a molecular hydrogen ion (H2+). It consists of just two protons and one electron—remove any one of these three components and you are left with something less than a molecular ion. This simplicity has made molecular hydrogen ions very attractive systems for physicists wanting to explore the dynamics of ionization—the process in which one or more electrons are stripped from an atom or molecule.

The recent development of lasers capable of generating incredibly short pulses that last for several attoseconds (10−18 second) has enabled scientists to probe molecular processes that occur on femtosecond (10−15 second) time scales, such as ionization.

Now, Yasuo Nabekawa and his colleagues at the RIKEN Center for Advanced Photonics and the University of Tokyo have used such lasers to determine what happens when an attosecond pulse train removes an electron from a hydrogen molecule. What they discovered overturns a common assumption that scientists have been employing for decades.

The measurements revealed that after an electron is ripped from a hydrogen molecule—a process that it is thought to take about 0.1 femtoseconds—an approximately 1-femtosecond settling time occurs, during which a ‘vibrational wave packet’ is created. The complete ionization process finishes after the settling time of the wave packet.

Previously, scientists had invoked the so-called Franck–Condon principle, which essentially predicts that the wave packet will be spontaneously produced after an electron has been removed. “It used to be believed that all the wave functions were instantaneously and simultaneously created at the time of ionization based on the Franck–Condon principle,” explains Nabekawa. “Our observation clearly goes against this received wisdom.”

In the future, the team intends to use their high-intensity attosecond lasers to manipulate reactions between different chemical species.