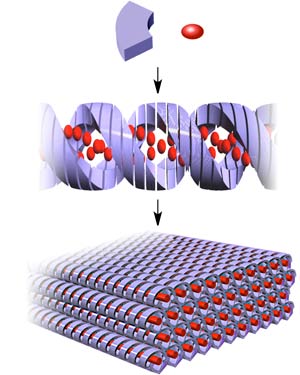 Figure 1: A porous framework (purple) consisting of helical pores in which various small molecules (red ovals) can be hosted is useful for exploring nonlinear optical effects. Reproduced from Ref. 1 and licensed under CC BY 4.0 © 2015 C. Li et al.

A polymer framework with the potential to host any small positively charged molecule within its helical pores has been produced by RIKEN researchers (Fig. 1)1. By placing molecules inside this framework, the scientists were able to explore optical phenomena that had previously been difficult to study.

“Some interesting effects—so-called nonlinear optical phenomena—occur only when functional molecules are arranged in one-handed helices,” explains Yasuhiro Ishida, who led the study and is from the RIKEN Center for Emergent Matter Science.

To prepare the liquid-crystal framework, the researchers formed a salt in a stable liquid crystal by mixing equal amounts of a polymerizable carboxylic acid and an amine template in solution. They controlled the orientation of the liquid crystals by applying a strong magnetic field during drying. The scientists then fixed the shape of the framework by inducing polymerization through irradiating the liquid crystals with gamma-rays.

The resulting polymer film was flexible, robust and free-standing. Analysis revealed that its helical pores had the same orientation—a desirable property when studying nonlinear optical effects since otherwise optical signals from different helices may cancel each other out. The team claims that this is the first porous material to simultaneously possess helicity with controlled handedness and macroscopic orientation.

After removing the amine template by immersing the polymer framework in an acidic solution, the scientists introduced guest molecules to the framework by submerging it in a solution containing the target molecules.

“We have already supported seven kinds of molecules and ions in the polymer framework,” says Ishida. While these molecules and ions were all either amines or carbonates, the team anticipates that the framework can function as a universal scaffold. “In principle, our polymer framework can accommodate any cationic or basic molecule, as long as the molecule is smaller than a few nanometers.” It thus promises to be an extremely versatile material as a wide range of properties can be imparted by simply varying the host molecule.

One phenomenon the team wants to study using the framework is the nonlinear optical process known as second-harmonic generation. In this process, two photons of the same frequency combine to generate a single photon with double the frequency. The team tested one of the guest molecules in the framework and realized strong second-harmonic generation.

In addition to using the polymer framework to explore other nonlinear optical effects, the researchers plan to use it to separate chiral molecules—an important process in pharmacy and agrochemistry.