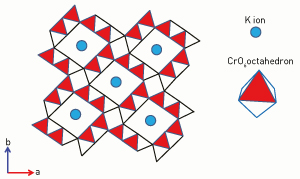 Figure 1: The interaction between electronic and structural effects in the complex crystal structure of K2Cr8O16 causes its unusual magnetic and electrical properties. Reproduced from Ref. 1 and licensed under CC BY 4.0 © 2015 P. A. Bhobe et al.

The properties of typical ferromagnets like iron and nickel have been widely studied and are relatively well understood. However, a few rare magnetic materials exhibit complicated behaviors that are difficult to explain. In an experimental and theoretical investigation of one of these complex materials, RIKEN scientists, with collaborators in India, Germany and Japan, have uncovered how the interplay between electronic and structural effects gives rise to fascinating magnetic and electrical properties1.

Ferromagnets consist of regions, or domains, in which all the magnetic spins are aligned in the same direction. The ordering of the magnetic spins is related to the arrangement of atoms in the crystal structure. It also depends on the valency of the magnetic atoms, namely the number of electrons in the outermost shell per atom. This parameter does not usually change across the ferromagnetic transition as a function of temperature.

One exception is K2Cr8O16, a close relative of CrO2, the magnetic compound used in recording tapes. As the temperature drops below 95 kelvin, K2Cr8O16 changes from being electrically conducting to insulating, but unusually, it remains ferromagnetic. “A transition from a ferromagnetic metal to a ferromagnetic insulating ground state is quite rare, with only a few known examples,” explains Ashish Chainani of the RIKEN SPring-8 Center, who led the study.

This surprising property of K2Cr8O16 has been linked to its crystal structure (Fig. 1), which consists of a framework of octahedra made of chromium and oxygen atoms. The chromium atoms, which determine the magnetic properties, exist in a mixture of +3 and +4 valence states.

By performing spectroscopic measurements, the researchers tracked those valence states as the material transitioned from a conductor to an insulator. They found the distribution of +3 and +4 valence states changed as it was cooled to 95 kelvin. “These fluctuations have been totally missed in previous work,” says Chainani.

Once the material becomes insulating, the distribution of valence states is frozen in, with on average three in four chromium atoms having +4 states and one having a +3 state. Theoretical calculations revealed that the structural changes in the crystal alone cannot explain such complex ferromagnetic properties. Rather, the unusual properties of this material stem from interactions between the electrons―known as strong correlations―along with small distortions in the crystal structure.

These findings highlight the importance of comprehensively studying the electronic and structural properties of complex materials, in which subtle effects can significantly alter the material properties.